he major problems are traffic congestion, lack of parking space, lack of public transport and inadequate footpaths which cause vehicle and public conflicts 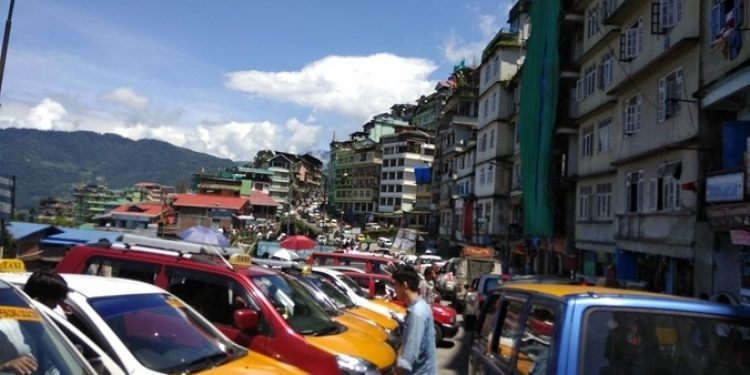 Sikkim’s capital city — otherwise known for being plastic- and litter-free with disciplined traffic, where lane-driving is the cultural norm — is facing huge traffic congestion, just like other metropolitan cities.

The only road connectivity to Gangtok is NH10, which forms the artery of the road network in the city. The major problems are traffic congestion, lack of parking space, lack of public transport and inadequate footpaths which cause vehicle and public conflicts.

This is especially critical for Gangtok, which, as a mountain city, has inherent constraints of space. The city is now considering alternative, non-road modes of transport like cable cars to ease public mobility.

The Sikkim government’s Urban Development & Housing Department (UD&HD) conducted a consultation and workshop last week on finding short-term and long-term solutions to the traffic problems in Gangtok, a city of almost 180,000 people.

It is crucial that a workable alternative is found and implemented as soon as possible before the city is choked up completely, experts opined.

A Comprehensive Mobility Plan for Gangtok was presented by Feedback Infra based on a study made on the city’s terrain and traffic movement. It provided possible solutions of decongestion through cable cars and creation of ring roads that help movement on Gangtok’s inner and outer ring roads.

Parallels were drawn with other cities around the world with similar problems like Suwon in South Korea, Bandung in Indonesia and Medellin in Colombia, whose topography resembles Gangtok in many ways, and suggested the measures they have taken — like skywalks, eco-mobility festivals and the like “to instil a sense of ownership to the public utilising these public commute services”.

UMTC provided a detailed presentation on Techno-Economic Feasibility of Cable Car as Public Transport. A study based on the travel characteristics of Gangtok, while keeping in mind safety measures, said that locations have been identified as stations and a model drawn for cable cars to be implemented as a mainstream public transport. They also cited various examples of cities from all across the globe that use cable cars as their mode of transport and concluded that it would work if integrated in with other modes of public transport.

Sikkim Urban Development Minister N.K. Subba, in his address, said: “More interactions and awareness programmes, like this one, on traffic decongestion and urbanisation is the need of the hour. We are at the start of something historic.”

He also talked about future projects that the government of Chief Minister Pawan Chamling is planning to undertake to tackle the traffic menace, like widening of various roads at busy junctions and construction of sidewalks for efficient pedestrian movement.

“It is absolutely crucial for our sensitive ecology that all stakeholders and entrepreneurs take into account the sustainable development goals while working out effective strategies to tackle this common problem. We all, as a society, need to work collectively and responsibly,” Lok Sabha MP P.D. Rai said.