Former Manipur Chief Minister RK Dorendra passed away on Friday evening following prolonged illness here. He was 82 and leaves behind his wife and sons.

Dorendra died at a hospital in Imphal East district at around 8 pm on Friday. He was admitted to the hospital few months back after his conditioned worsened due to various old-age ailments. 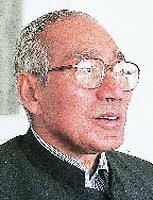 Dorendra, who hailed from Yaishul in Imphal East district, in the past, represented a number of political parties including Congress and BJP. Currently he was with Manipur People’s Party (MPP).

He was also Rajya Sabha MP from 1988 to 1990. He represented from Manipur as the Congress MP.

Speaker of Manipur Assembly, Y Khemchand has expressed his sadness and condoled the demise of former Chief Minister Dorendra.