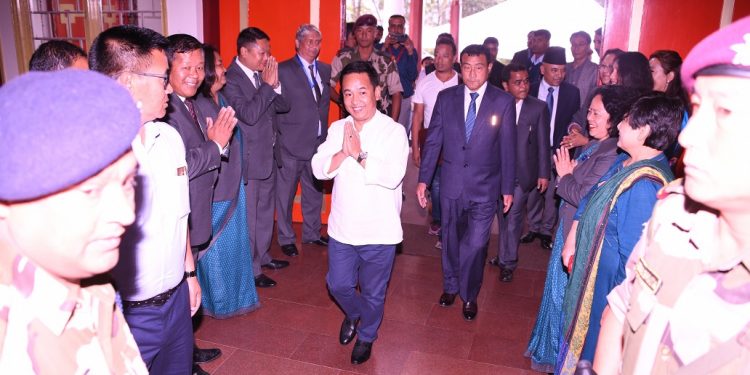 The first session of the 10th Sikkim Legislative Assembly was held in Gangtok on Monday.

The newly elected members of the House were administered the oath or affirmation by Pro Tem Speaker Sangay Lepcha.

Meanwhile, the legislators who had won from two seats gave up one seat each. SKM MLA Kunga Nima Lepcha gave up his Gangtok seat while as SDF MLAs Pawan Chamling resigned from Poklok Kamrang and D T Lepcha resigned from Rumtek Martam constituency.

In continuation of Assembly business, the Pro Tem Speaker announced that he had received only one name, that is, of L B Das for nomination of election as Speaker of Sikkim Legislative Assembly.

The motion for election of the Speaker was put to vote in the House and L B Das was elected as the new Speaker of Sikkim Legislative Assembly unanimously.

Immediately after L B Das took charge as the Speaker of the Assembly, SDF president Pawan Chamling stood up and contested the appointment of SKM president P S Golay as the chief minister of Sikkim. He contested that as per the constitutional and legal provisions, Golay cannot hold any constitutional post. Then, he left the Assembly along with his elected legislators of SDF party.

The chief minister then introduced his council of ministers to the House.

In his valedictory address, the chief minister thanked the people of Sikkim for restoring faith in the Sikkim Krantikari Morcha (SKM) party and for giving it the mandate to run the Government.

He also congratulated the people of the country for bringing the Bharatiya Janta Party (BJP) back to power by offering huge mandate. He congratulated Prime Minister Narendra Modi, his council of ministers and all members of Parliament for forming the government at the Centre with a huge majority.

Golay also expressed his disappointment at the walk-out staged by the MLAs of the opposition party. He termed the act as a gross violation of the Constitution and showed the disregard the leader of the party Pawan Chamling has for democratic ideals.

He added that the SKM party on the other hand had accepted the people’s mandate in the previous Assembly elections in 2014 and played the role of an opposition party with utmost sincerity.