We are embarking on road to glorious future: Narendra Modi

Addressing the gathering of scientists and academicians gathered from across the country, Prime Minister Modi said that he is confident that ‘through the dedicated efforts of our scientists, we are embarking on the road to a glorious future’, adding, ‘the future we wish for ourselves and for our children.’ 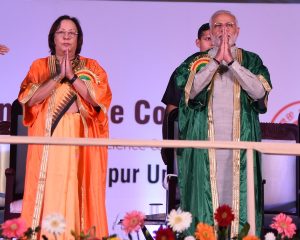 “India has a rich tradition and a long history of both discovery and use of science and technology. It is time to reclaim our rightful place among the front-line nations in this field. I call upon the scientific community to extend its research from the labs to the land,” he said.

Modi also said, “We have to be future ready in implementing technologies vital for the growth and prosperity of the nation. Technology will allow far greater penetration of services such as education, healthcare, and banking to our citizens.”

The Prime Minister said a target of 100 GW of installed solar power by 2022 to be set adding that the efficiency of solar modules currently available in the market is around 17 per cent to 18 per cent.

“Can our scientists take a challenge to come up with a more efficient solar module, which can be produced in India at the same cost?” the Prime Minister questioned the august gathering. 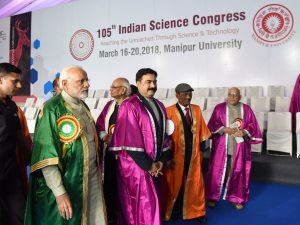 Under this scheme, ‘bright minds’ from the best institutions in the country, like IISc, IIT, NIT, IISER and IIIT will be offered direct admission in Ph D in IIT & IISc.

According to the Prime Minister this will help address brain-drain from the country.

“Our Government has already given the go-ahead to establish 3rd LIGO detector in the country. It will expand our knowledge in basic sciences in the areas of lasers, light waves & computing. I am told that our scientists are tirelessly working towards making this a reality,” Modi further added.

He also asserted his government’s commitment of increasing the share of non-fossil fuel based capacity in the electricity mix above 40 per cent by 2030.

“India is a leader in the multi-country Solar Alliance and in Mission Innovation. These groupings are providing a thrust to R&D for clean energy,” he said.

While calling upon the scientists to develop a mechanism for interaction with school children, Modi said that scientific achievements need to be communicated to society. This, he said, will help inculcate scientific temper among youth.

“We have to throw open our institutions & laboratories to our children,” he said.

Modi also apprised the gathering that an ‘Ethno-Medicinal Research Centre’ has been set up in Manipur to undertake research on the wild herbs available in the north-eastern region, which have unique medicinal and aromatic properties.

The Prime Minister also said that the State Climate Change Centres have been set up in seven north-eastern states.

This is just the second time in over a century that the Indian Science Congress is being held in the North-east. 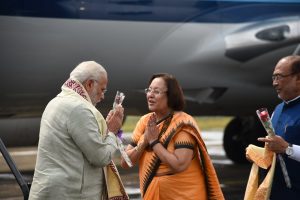 He will address the gathering too at the venue.