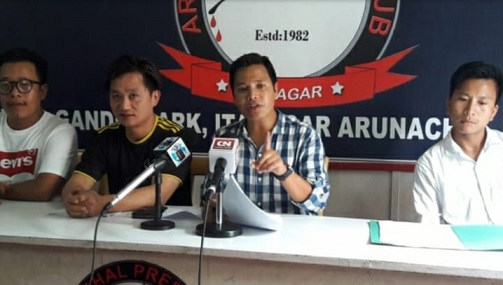 The All East Kameng District Students’ Union (AEKDSU) while welcoming the State Government’s announcement to hand over Toko Yame murder case to the Central Bureau of Investigation (CBI), also said that it will go ahead with the proposed economic blockade against Tawang district if rest of its demands are not fulfilled at the earliest.

Interacting with media at the Arunachal Press Club in Itanagar on Thursday the union leadership said that the Pema Khandu government cannot just walk away with only accepting one of the demands and ignoring the others.

‘We feel we are being deceived by the State Government,’ said AEKDSU general secretary Nera Gumru.

Gumru stated that the union or even the victim’s family are yet to be officially informed about the handing over of the case to CBI.

He also said that the matter will also be taken to National Human Rights Commission (NHRC) for their intervention.

Notably, the other demands of AEKDSU include immediate re-arrest of all the suspected culprits, immediate suspension of all police personnel who were on PCR duty on that particular day, post-mortem report to be made available and the preliminary investigation report of the case to be made public or to victim’s family.