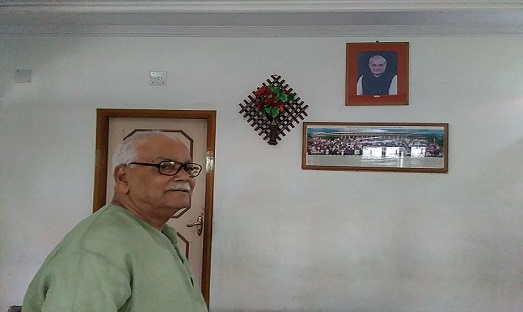 Atal Bihari Vajpayee, the father figure of Bharatiya Janata Party (BJP) used to call him ‘Purkayastha ji’, all the time.

“I met him for the first time in 1952-53 when Atal Bihari Vajpayee, who later went on to become the Prime Minister of our country, came to Silchar to meet some followers of the Jana Sangh, as he was the general secretary of this wing in those days,” reminisces, ex-Union Minister Kabindra Purkayastha.

Speaking to Northeast Now Thursday, as his eyes are set on the television sets, Kabindra Purkayastha, narrated one incident after another, of his days with A B Vajpayee.

“In 1980 on April 6, Atal ji, called a meeting of all Jana Sangh members in Delhi and I was called to attend it. Later, in the evening of that day, he called me personally and said verbally to take charge of Assam, as Jana Sangh was officially rechristened as Bharatiya Janata Party.

Following his orders, I reached Guwahati, but, not getting much response, moved to Silchar and in May that year, a BJP working committee was formed in Silchar which was the stepping stone of BJP in Assam or Northeast as a whole.”

He added, “I went on to win the Lok Sabha (LS) seat from Silchar in 1991, and along with me, my adjacent LS seat of Karimganj was won by Dwarka Nath Das also from the BJP. With this, BJP opened its account for the first time in the whole of Northeast in Lok Sabha in 1991. In 1998, I won again and went on to become a part of Atal ji’s ministry which came as a surprise for me.”

Surprised he was no doubt, for till late at night before the oath taking ceremony next day, Kabindra Purkayastha was not aware of getting any ministry. But, next morning when he woke up at 7 am, a call came and along with it three invitation letters informing him that he needs to get ready for taking oath and these three invitations are passes for him to bring three other family members along.

Between Atal Bihari Vajpayee’s tenure as leader of the opposition from 1993 to 1996, once Uma Bharati, the then BJP’s Mahila Morcha President wanted to do a rally in Karimganj district of Assam. She approached him and was sent off saying if Purkayastha ji, says so, I would think about going.

Kabindra Purkayastha kept on his narration to Northeast Now and said, “Uma Bharati came to me and requested to approach Vajpayee ji. I too went, and the moment he saw me, said, I know Uma has sent you. Do you think I need to go there. I said, at least 50,000 mahila morcha and his supporters would turn up. Vajpayee ji, retorted, saying, do you think 30,000 people would turn up. That made me angry and he too understood but said that he would visit Karimganj. Atal Bihari Vajpayee, attended and also witnessed more than a lakh people turning up to listen to him. That day he and myself drove back to Silchar from Karimganj which is a 60-kilometre ride. Vajpayee ji noticing that I was not talking feeling still angry and sentimental for his remarks of having at least 30,000 people somehow, said, tum baat kam kar rahe ho, kya baat hai, hum par gussa ho, lekin, bahut hi sandaar sabha ka aayojan kiya.”

Before winding up his conversation with Northeast Now, Kabindra Purkayastha didn’t stop from saying the nature of his own father figure, Atal Bihari Vajpayee, from whom Purkayastha ji learnt the nuances of his political career.

“Once when I went to meet him, he didn’t say anything but told me to join him for a ride. I thought he would take me to some parts of Delhi, but when we reached New Delhi airport, I boarded the flight and again asked him as to where we were going. He didn’t say anything but upon reaching Kurukshetra which is nearby in Haryana, we went to address a rally. I was surprised to see my cut outs too out there and he never said me anything all along. He is that type of a person one whom I can never forget in my lifetime,” Kabindra Purkayastha added.

Indeed it is hard to forget with whom Kabindra Purkayastha spent the most part of his political career and left the job to join politics, the doyen of Indian politics above all party lines, 94 year old Atal Bihari Vajpayee breathed his last at 5:05 PM on August 16, 2018.