Assam mourns ex-Indian Prime Minister Atal Bihari Vajpayee on Thursday. The nonagenarian ex-Prime Minister of India breathed his last at the All India Institute of Medical Science in New Delhi at 5.05 pm.

As soon as the news of Vajpayee’s death spread social media were flooded with condolence messages from cross sections of Assamese society.

Media and protocol division of the AIIMS, New Delhi in its release  stated, “It is with profound grief that we inform about the sad demise of former Prime Minister of India, Shri Atal Bihari Vajpayee at 5.05 pm on 16.08.2018.”

Vajpayee was admitted to AIIMS, New Delhi on June 11 and was stable in the last nine weeks under the care of a team of AIIMS doctors. The former PM’s condition deteriorated in the last 36 hours and he was put on life support system. 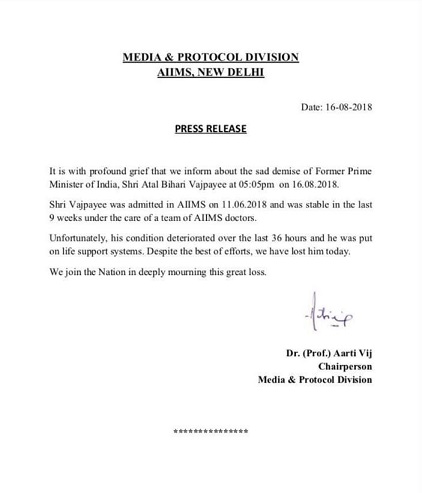 As soon as the news of ex-PM Vajpayee’s demise spread condolence messages started pouring in the social media.

Describing him as a towering personality and a powerful national voice who had played crucial roles even on the international political scene, Prof Mukhi said that in his death, the nation had lost an eminent statesman who had earned the unique distinction of being the first non-Congress Prime Minister who led the country three times as Prime Minister.

Prof Mukhi said, “The sagacity and leadership of the former Prime Minister at both the national and international levels has been a source of inspiration and guidance.” Atal Behari Vajpayee in 1977 as India’s foreign minister surprised one and all in the UN General Assembly by speaking in Hindi.  The way he conveyed so much in so few words left the world dumbfounded.  He spoke about Vasudhaiva Kutumbakam at that level and made the intentions of the country clear at the world forum. This speech made many people realize the importance of the native tongue and also placed an Indian Language on the political stage of the modern world for the first time.

In a condolence statement, the Minister said, “Atal Bihari Vajpayee was an iconic statesman and stalwart of Indian politics. A revered politician, Vajpayee was widely appreciated in national and international arena for his acumen and foresight. One of the most popular public figures of the country, Vajpayee was loved, appreciated and regarded as a role model by generations of leaders in the country. His demise is a huge loss for the nation.”