The call of the cuckoo, the uncurling of shiny green new leaves, the blossoming of flowers and the nesting of birds herald the advent of spring in the region.

In the midst of nature’s procreation, Assam Bandhu, an organization committed to conserve wildlife and culture of the state, has stepped in to lend a helping hand. 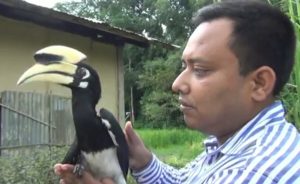 The organisation which has scripted an oriental pied hornbill conservation success story at Borbhuin Chetia Gaon, seven km off the NH 37 in Dibrugarh district is now making an attempt to help in the hornbills proliferation by putting up a wooden box on a tree to act as a nest.

Founder of Assam Bandhu, Suryya Kumar Chetia said that shrinking habitat and lack of trees with hollows where these birds build their nests became a factor to find an alternative.

“The idea came from one such structure made in Malaysia to aid birds to nest.  We have placed one high up on a tree and tied it tightly to the tree with aluminium wire.  Till now we have seen the birds peering in but have not yet built a nest.  If they take to it within a couple of years, we will put up more, “he said.

Chetia, has directed and produced a short film of the tame hornbills which fly without fear in the village and alight and gorge on banana, amla, papaya trees in the households.

The people never kill a single bird.  A tale is told in the village about how an army had shot one of a pair of birds and was himself killed in a blast in a train while going to join his regiment.

The heart rending cries of the female bereft of her mate was heard for years in the village and the army man’s death was viewed as a curse by the female bird.

In the village, Golapi Chetia, retired headmistress of number two Majumelia LP School, has been entrusted with the task of ensuring that the birds are well cared for.

Every morning at her hornbill cottage she hangs ripe bunches of bananas on a bamboo, so that they can feed on the fruit. She has also planted 200 banana trees in her garden so that they have an unending source of food.  In case a hornbill falls off a tree and injures itself, the villagers nurse it back to health.

Lambadar Bora is the proud owner of the xilikha tree in the village where a pair has built their nest.  He vows never to cut down the tree nor allow anyone else to do so.

Assam Bandhu bagged the Homen Bogohain Green award in 2016 for planting trees and conserving the birds.

The initiative to conserve the Oriental pied hornbills began in 2015 with a signature campaign among the villagers to protect the birds.  They also hung posters on the trees in the village.