“Congratulations to you on your party’s victory in the recent elections to the State Assembly. As you know, I very much appreciate your friendship, and the affection and warmth that the people of Arunachal Pradesh have shown me during my visits there,” the Dalai Lama wrote in a letter.

“Last month marked the 60th anniversary of our life in exile. I take this opportunity to express our gratitude to the State government and people of Arunachal Pradesh for their friendship and kindness to the Tibetans settled there,” the spiritual leader said in the letter.

Stating that Arunachal Pradesh has made rapid progress over the years, which will become increasingly meaningful the more it improves the lives of ordinal), people, the Dalai Lama also said, “I wish you every success in meeting the challenges involved in fulfilling the hopes and aspirations of the people of Arunachal Pradesh.” 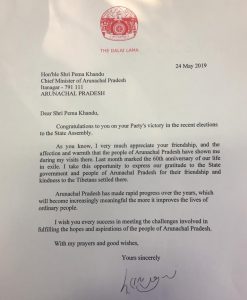 “I pray you will be successful in meeting the challenges that lie ahead in fulfilling the hopes and aspirations of the people of India. India is one of the great ancient civilizations, a distinctive and fundamental feature of which has been ahimsa and karuna – non-violent conduct motivated by compassion,” the Dalai Lama said.