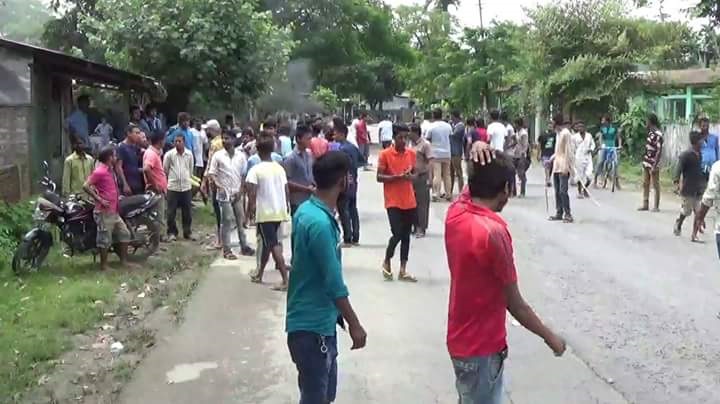 Violent clashes erupted between two communities after a derogatory Facebook post about a deity went viral in social media at Borhapjan area of Doomdooma in Tinsukia district on Friday. Photo: Northeast Now

Violent clash erupted between two communities after a derogatory Facebook post about a deity went viral in social media at Borhapjan area of Doomdooma in Tinsukia district on Friday. At least 15 persons were injured in the incident.

Police had to fire tear gas shells into air and charged batons to control the situation. Following the incident, Tinsukia deputy commissioner Oinam Saran Kumar Singh imposed prohibitory orders under section 144 in Doomdooma, Longswal and Borhapjan areas of the district.

On Thursday evening, a minor skirmish broke out between the two communities at the Dr Rajendra Prasad Road in Doomdooma town. The matter was however sorted out after the intervention of elders.

On Friday at around 9 am, angry protesters of the community whose deity was abused in social media took out a procession from Doomdooma to Borhapjan demanding the arrest of the culprit. As the rally was passing through the Borhapjan old market area, a group of members from the other community attacked them. Soon the area turned into a battlefield with two groups pelting stones at one another.

A huge police force and CRPF team arrived at the spot and fired tear gas cell and charged batons to  bring the situation under control.