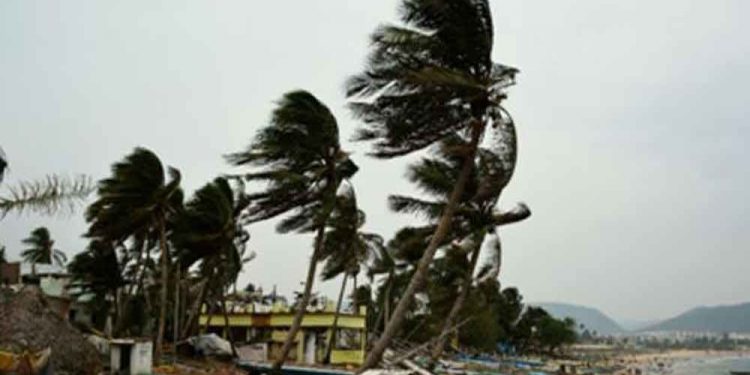 The coastal town of Vishakhapatnam has already feeling the severe effect of cyclone Fani with the speedy winds reaching 90 to 110 kms.

Due to heavy rains and winds, the trees and electric poles have been broken down on the roads and power supply has been interpreted in many places in the district.

Fani, which has turned into an ‘extreme severe cyclonic’ storm, is about 450 km from the Odisha coast, according to a tweet by the India Meteorological Department (IMD) early Thursday morning.

According to weather experts the cyclonic storm, pronounced ‘foni’ – is moving northwards with a speed of five kms per hour in last six hours and is likely to make landfall at Odisha coast between Gopalpur and Chandbali anytime after Friday afternoon, with wind speed of up to 200 km per hour.

Assam government has made arrangements for special trains to evacuate tourists and visitors of the State from Odisha.

The first train has already left from Puri at 12 noon.

The second train to Howrah is at 3 pm from Puri.

The third train to Howrah from Puri is at 6 pm on Thursday, according to a latest government bulletin.

Meanwhile, the severe cyclonic storm Fani that is expected to ravage the coasts has triggered country-wide panic which has led the Indian Railways to cancel 81 trains including three in the Northeast.

The 12508 Silchar-Thiruvanantapuram Aronai Express was scheduled to leave Silchar on Wednesday (May 1, 2019).

Meanwhile, the Central and the Odisha government have put the disaster relief machinery including the NDRF, SDRF and Armed forces on high alert.

About 800,000 people are expected to be evacuated from low-lying areas of 14 districts in Odisha. The cyclone is currently around 450 km off the Odisha coast.

The impact of Cyclone ‘Fani’ is likely to be much more severe than ‘Titli’, which had hit the Odisha-Andhra coast last year and killed at least 60 people.

Tropical Cyclone Fani, brewing in the Bay of Bengal some 450 km offshore and moving westwards, is expected to make landfall on Friday afternoon near the holy town of Puri.