Candlelight vigil at Dimapur in honour of Pulwama attack victims 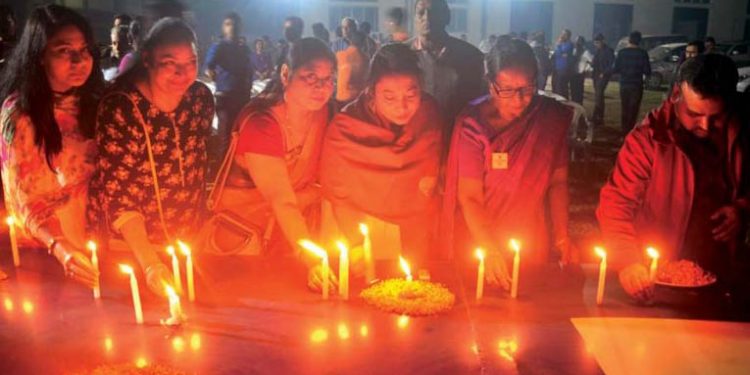 Members of Lions Club, Dimapur at a candlelight vigil in honour of the Pulwama attack victims on Friday evening. Image - Bhadra Gogoi

People of Kohima and Dimapur in Nagaland participated in a candlelight vigil in honour of the CRPF personnel, including one jawan from Assam’s Baksa district, killed in a suicide bomb attack at Pulwama in Jammu and Kashmir on Friday evening.

“We respect & salute the supreme sacrifice of our brave CRPF jawans who sacrificed their life for our country…,” one of the banners read.

In Dimapur, a candle light programme was also held at Lions Club to pay tribute and homage to the departed soldiers.

The members condemned the cowardly terrorist attack on the brave jawans.

The Lions Club said a cowardly attack on our brave jawans happened on the Srinagara-Jammu Highway in Pulwama on Thursday.

“Let us stand with them and pledge our solidarity with the family of those martyred,” a pledge taken at the programme said.

It may be mentioned that at least 44 CRPF jawans were killed on February 14 when a suicide bomber attacked a convoy of CRPF personnel at Pulwama in Jammu and Kashmir.

Since then all the parts of the country have condoled the death of the soldiers in what was the deadliest attack on the armed forces in Jammu and Kashmir.

The surprise attack on the convoy of a CRPF personnel by a Jaish-e-Mohammed (JeM) suicide bomber left the nation in shock and anger while Prime Minister Narendra Modi gave security forces a freehand to strike back with equal force.