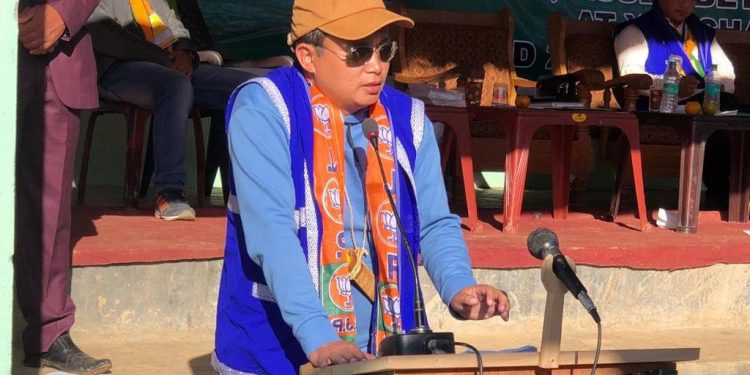 While asserting that the Bharatiya Janata Party (BJP) will once again come to power in the 2019 Assembly polls, Arunachal Pradesh’s 27 Liromoba MLA Nyamar Karbak has called upon the people of the State to cast their votes in favour of the saffron party in the upcoming Assembly elections.

“The BJP-led State Government has looked into every demand and necessity of the Galo community and it is time that the people cast their precious votes in favour of the BJP and vote for development,” said Karbak.

The day long programme which was chaired by mandal president Bajum Bogo was attended by more than 1500 people.

Karbak said that State Chief Minister Pema Khandu will be the face of the BJP in 2019 Assembly polls in the State.

The MLA further called upon the people and party workers to keep faith in the present leadership and BJP as a party and claimed that the citizens of Arunachal would witness heaps and bounds of development in the next four-five years if the BJP is voted to power.

Speaking on the occasion, BJP’s West Arunachal mandal president in-charge, Nani Laji urged upon the party leaders and karyakartas to stand united and spread awareness about various people-friendly schemes and programme launched by the BJP government at the State and Centre.

“With the 2019 Lok Sabha election around the corner, we have to stay united and vouch for development. We have to particularly stay away from rumours and fake gossips during this time,” Laji said.