BJP set to win both Lok Sabha seats in Tripura 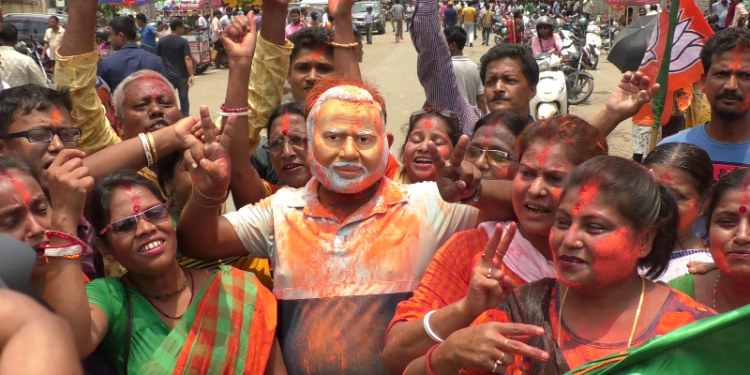 BJP set to win both the Lok Sabha seats in Tripura as the saffron party is leading in the seats by a huge margin of votes.

The counting of vote for two parliamentary seats started here from 8 AM at 40 centres across the state in eight districts under tight security.

Re-polling was held in 168 of the total 1,679 polling stations on May 12 in the Tripura West seat as huge electoral malpractices were found during the first phase of voting held on April 11 while polling for the Tripura East seat was held on April 23.

With around 50 percent of the vote have gone in their favour, the BJP candidates are leading in both the seats while Congress is in the second position ahead of the Left candidates.

Both Left Front and Congress in Tripura West seat have alleged that security arrangement in the counting is not proper with just routine security.

While the Left Front candidate and incumbent MP Sankar Prashad Datta alleged that their counting agents were prevented by BJP supporters from entering the counting halls at various places, the Congress candidate Subal Bhowmik alleged that misappropriation had happened on the day of the polling and more than two lakh voters were deprived from casting their vote beside massive rigging by ruling BJP.

“Unfortunately, the ECI giving ordered re-poll only in 168 polling centrea though the RO had himself admitted malpractices in more than 400 centres in Tripura West seat,” Datta said.

BJP candidate of Tripura West parliamentary constituency, Pratima Bhowmik said that she is confident of BJP’s victory in both the seats.

She said that as a worker of the BJP her wish is to see with the huge number, the NDA returns to power under Modi and also a massive victory in both the seats of Tripura.

However, BJP supporters have already started celebrating the victory of the party in both the seats as well at the centre.

The Congress candidate of Tripura East parliamentary constituency Kumari Pragnya Debbarma said it is too early to predict.

Sitting by the side of the incumbent MP and Left Front candidate for the Tripura East seat Jitendra Chowdhury in the counting centre at Ambassa, the royal family member and Congress candidate said, “Right now we are observing the trend, we cannot say anything.”