We will win more than 300 Lok Sabha seats across the country: Assam BJP president 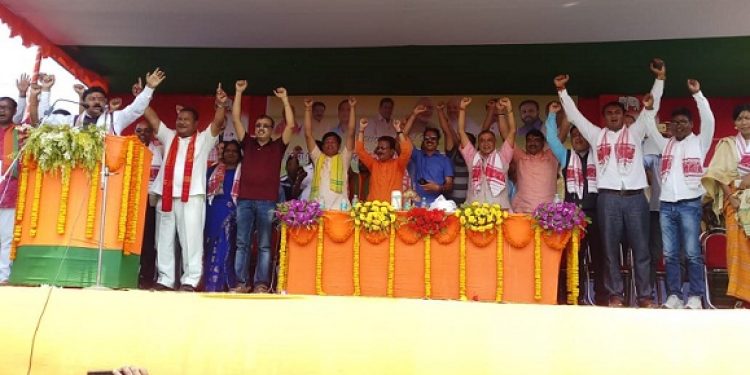 Assam BJP president Ranjeet Kumar Dass on Sunday exuded confidence that their party and allies will win 13 of the 14 Lok Sabha seats in Assam.

State BJP president Dass claimed there has been still a ‘BJP wave’ in Assam and the party and its allies will win “13 of the state’s 14 Lok Sabha seats”.

In the total 14 Lok Sabha constituencies in Assam, the BJP has fielded 10 candidates while it has left 3 seats for its ally Asom Gana Parishad (AGP) and 1 seat for its another ally Bodoland People’s Front (BPF).

“In my calculation, compared to 2014, we will do better and the voting percentage will go up in our favour this time due to our pre-poll alliance with the AGP and BPF,” asserted Dass.

He said a storm is blowing in favour of Narendra Modi -led BJP government across the country and the people of the country have already decided to give another term to Modi as the Prime Minister of the country.

“This is the Modi government that can take on terrorism and provide a strong leadership to the country. Narendra Modi has taken a number of developmental schemes for the uplift of the poor people of the country like Ujjawala, Ayushman Bharat, Swachh Bharat and Kisan Samridhi Yojna. The common people get the benefits from these schemes,” said Dass.

Dass was addressing an election campaign rally on Sunday at Mahamaya Playground of Gauripur town in Dhubri district for AGP candidate Zabed Islam, who is contesting the Dhubri Lok Sabha seat.

Dass said he visited most of the Lok Sabha constituencies in the state and found that in compared to 2014 Lok Sabha polls, “in 2019, the liking towards Prime Minister Narendra Modi has increased”.

“Across the country, we will win more than 300 Lok Sabha seats,” he further claimed.

Dass claimed: “The people of Assam have come to know about the secrete alliance between the Congress and AIUDF which will directly benefit the BJP.”

The state BJP chief alleged that despite being the MP of Dhubri Lok Sabha constituency for 10 years, AIUDF chief Badruddin Ajmal has done nothing for his constituency due to which Dhubri has become the most backward district of the country.

He also lambasted former Congress-led government which ruled in Assam for last 15 years but failed to fulfil the basic needs of the common people.

Ranjit Dass was campaign for his alliance party (Asom Gona Parishad) candidate Zabed Islam who is contesting from Dhubri lok Sabha seat and polling for which will be held on April 23 starting from 7am to 5pm.