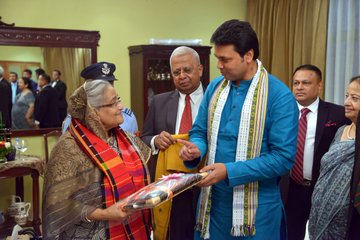 In a dinner hosted by high commissioner of Bangladesh in the national capital chief minister Deb discussed various issues relating to development and prosperity of Tripura.

The chief minister placed a host of demands.

He urged Sheikh Hasina to start direct flight connectivity between Dhaka and Agartala.

Highly placed source confirmed that, the Prime Minister of Bangladesh gave mutual consent to this demand.

In an another major issue Biplab Deb urged Sheikh Hasina to declare Sonamura with Government of India waterways as International Protocol route.

He said to PM of Bangladesh that it will increase and boost the trade between the two countries.

Before leaving to Delhi on Thursday, Tripura chief minister told reporters that he will raise some demands to Bangladesh Prime Minister regarding the State.

After the dinner and the meeting with Sheikh Hasina, Biplab Deb was happy and he wrote to his social page, “Delighted to attend the dinner with Hon’ble PM of Bangladesh Sheikh hasina ji hosted by High Commissioner of Bangladesh at New Delhi tonight.”

He also wrote some lines about the discussions with Sheikh Hasina.

The CM wrote, “Had fruitful interaction with her regarding various issues related to Indo-Bangladesh relations. Since Tripura is surrounded by Bangladesh various bilateral issues related to Tripura & Bangladesh was also discussed. Most importantly after my request Madam Hasina also has shown interest for an international flight from Dhaka to Agartala.”

Biplab Deb told through his social page, “Both Madam Hasina and our PM Shri Narendra Modi ji shares a good bond and making friendly relation of both the countries including economic development.”