The ULFA-I on Monday strongly refuted the report published in The Week that carried an ‘exclusive interview’ of Paresh Baruah, saying, the outfit’s commander-in-chief and vice chairman has never given any interview to the country’s one of the front-line magazines.

The report filed by Rabi Banerjee published in the December 2 issue of The Week claimed that in an exclusive interview ULFA’s military wing chief Paresh Barua says his group enjoys ‘very cordial relations’ with China.

In the interview that was published as part of the cover story of The Week magazine (December 2 issue), Barua says of China: “their friendship is unparalleled”.

But he was quick to warn that, “We need to understand China’s compulsions..so we cannot expect them to do everything we ask for. They can do certain things, but they cannot do everything for us.”

Barua is further quoted as saying: “We understand that situation, so we are reaching out to other nations.”

Which other nations he is talking about remains unspecified.

The magazine, which carries the story on its cover, does not make it clear whether Barua has given an interview in person or over telephone or just emailed his answers, and that too, how long ago. 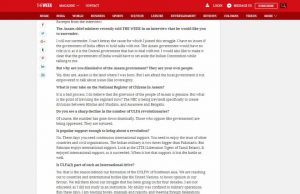 But the press release e-mailed to media houses on Monday and signed by Rumel Asom, member of the publicity wing of the militant outfit claimed that Baruah never met any correspondent of The Week and had never spoken to any journalist from that media house.

The ULFA-I press release further claimed that the entire interview is false, fabricated and cooked up by the author from his imagination.

It further claimed that some section of the media has taken resort to yellow journalism and defame the image of ULFA-I.

The statement further challenged The Week and Rabi Banerjee to make the evidences of the ‘interview’ public.

Coronavirus: ULFA (I) to stay away from celebrating Raising Day on April 7