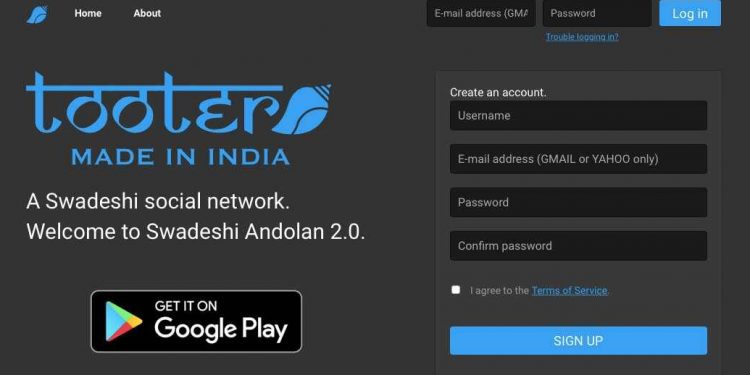 Is Twitter ready for a new competition in India? The American micro-blogging platform is in fact the primary target of a desi micro-bogging platform — the Tooter.

Yes, Tooter is also a micro-blogging platform that was launched in July 2020 and is a cross-over of Facebook and Twitter.

Suddenly, Tooter has started to draw attention for identifying itself as the “Swadeshi Andolan 2.0”.

Tooter believes that India should have a Swadeshi social network.

“Without one we are just a digital colony of the American Twitter India Company, no different than what we were under the British East India Company. Tooter is our Swadeshi Andolan 2.0. Join us in this Andolan. Join us!” the about page of Tooter claims.

The website of the desi micro-blogging site is tooter.in and the app is available on Google Play Store.

All the Tooter handles of all the prominent persons and politicians are verified accounts.

Interestingly, the UI and the user interface of Swadeshi Tooter looks like a clone of the Twitter. Tooter has a blue ‘conch’ as its symbol.

There is a Pro version of Tooter as well. One can upgrade to Tooter Pro by paying from Rs 1,000 per year. However, the site does not mention where to make this payment.