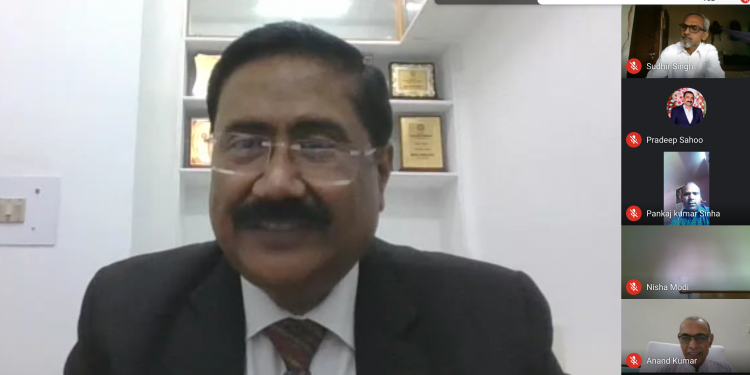 The webinar, a part of the observation of the 150th year of Mahatma’s birth, tried to understand Gandhi anew for igniting young minds to seek remedies of the issues and problems being faced at local, national and global level or even at an interpersonal level.

RGU vice-chancellor Saket Kushwaha delivered the inaugural address as the chairperson of the webinar organised by the Department of Sociology with Assistant Professor Shashank Yadav as the convener and head of department Bikash Bage as the director.

The vice chancellor called upon the youth, students, scholars and academia to identify with their Gandhi within and be honest to their personal and professional obligations as Mahatma had emphasized.

Dr Yadav dwelt on the concept note and said the Gandhian imagery should shift from his round spectacles and spinning wheel to his humane and empathetic principles.

Anand Kumar focussed on Gandhi’s way of living by nature and said his credo of Swadeshi is relevant in today’s India where ‘foreign’ has become ‘fashionable’.

Deepak Kumar advised against treating technology as a panacea while Pathak reflected on the Noakhali incident and reminded the audience that when there was hatred all around, love in the heart of the Mahatma helped pacify the rioters.

The webinar’s coordinator, Vinod Kumar Yadav from RGU’s Commerce Department said Gandhian ideology and philosophy is beyond time and space.

RGU pro-VC Amitava Mitra chairing the concluding session stated that Gandhi was a master strategist and refined economist who focused on every sector of the economy.

Ravi Ranjan Kumar, assistant professor of the Department of Social Work called upon the young participants to internalise the ideas and ideals of Mahatma for sustainability lies in simplicity.

The webinar focused on the core values of Gandhi like truth, non-violence, secularism, emancipation from discrimination, oppression based on caste system. The importance of ‘truth’ is now being felt in the age of falsehood and fake news circulated through various means of communication.

Nawaz Khan of the Department of Mass Communication performed the role of media coordination and highlighted that Gandhi was the best journalist this country ever had.