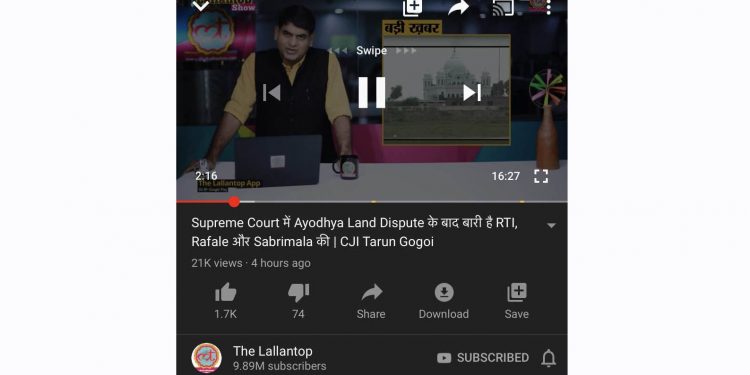 Goof-ups in media on national platform have become the order of the day.

Now a senior journalist, Saurabh Dwivedi, who has been in the field for more than 10 years made Tarun Gogoi the Chief Justice of India.

In his signature news programme, ‘The Lallantop Show’, Dwivedi has said on national media that former Assam chief minister Tarun Gogoi is the Chief Justice of India.

Assam’s son of the soil Ranjan Gogoi became the first Assamese, in fact first from the entire Northeast, to hold the supreme post post of Indian judiciary.

That itself made news when he took the ceremonial oath as the Chief Justice of India.

Later, he emerged as a firm pillar of justice with several landmark judgments.

Notably, the entire exercise of updating the National Register of Citizens (NRC) in Assam was supervised by the Supreme Court under Gogoi’s directive.

It is during his tenure that Assam got its final NRC.

He is retiring on November 17 next.

The misplacement of the name of the CJI is seen as a big blot on the illustrious career of Ranjan Gogoi as one senior New Delhi based journalist made a major goof-up.

Saurabh Dwivedi is presently the editor of the online video news programme ‘The Lallantop’ aired through Linkedin.

Before that he held several responsible posts in renowned national media.

He was the senior associate editor of India Today and news editor of Dainik Bhaskar.

Starting his internship with Star News, he started his professional career as a reporter in Live India News channel.

But it is a known fact, at least in the media circle that Sonowal is a bachelor.

Earlier, the website of one of country’s top economic newspaper had described two Nobel laureates in Economics – Amartya Sen and Abhijit Vinayak Banerjee – as classmates.