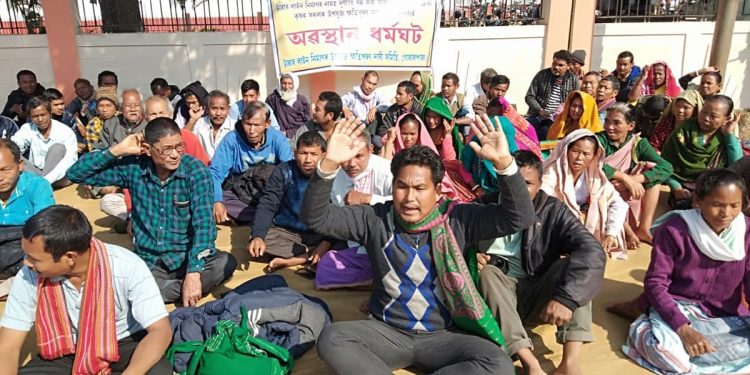 Hundreds of people from different areas under the Balijana and Kharmuja circles of Goalpara district staged a sit-in protest on Thursday against the Assam Electricity Grid Corporation Ltd (AEGCL).

The sit-in protest was staged in front of the office of the Goalpara deputy commissioner.

The agitators demanded compensation against the utilization of their lands by the company for erecting towers and lining high-powered cables as per regulations laid down by the ministry of power.

“According to the regulation, the company will have to carry out a survey prior to the installation of the towers and connecting more than 66 KV wires,” said Monisankar Goyari, a leader of the compensation demand committee.

“However, the AEGCL has constructed towers and has been connecting lines of 133 KV from Agia in Goalpara district to Hatsingimari in South Salmara Mankachar district without paying compensation to the poor landowners,” he said.

Goyari further said, “A tripartite meeting was held on September 28, 2018, at the office of the Goalpara DC in the presence of representatives of Krishsk Mukti Sangram Samiti and the company.”

A resolution was also adopted to undertake a government survey, Goyari said.

“However, some officials are trying to resume construction without survey. We demand that this conspiracy be stopped and compensation be paid following a proper survey without further delay.”

Besides Goyari, other demand committee office-bearers like Balobhadra Rabha, vice president, Naren Koch, Clapson Marak, and Jotin Brahma were present on the occasion.