Congress leader Rahul Gandhi on Thursday said that the signing of Assam and Mizoram accords have been two of the biggest achievements in the political career of his father Rajiv Gandhi.

Apart from these accords, he also mentioned on his official Twitter handle that the signing of the Punjab accord was also one of the significant achievement of his father.

While remembering his father on the occasion of his 75th birth anniversary, Rahul Gandhi claimed that the signing of these three accords strengthened the Indian Union and helped in bringing peace and ending conflicts and violence.

‘Amongst Rajiv Gandhi ji’s many achievements were the Punjab, Assam & Mizoram accords, that helped bring to an end years of conflict & violence. Built on a foundation of mutual respect, understanding & peaceful coexistence, these accords strengthened the Indian Union.’ 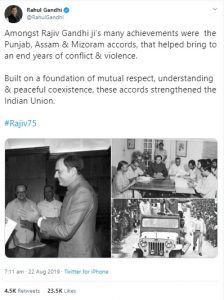 A six year agitation launched by All Assam Students Union (AASU) in 1979 demanding identification and deportation of illegal migrants culminated with the signing of Assam Accord in the presence of Rajiv Gandhi on August 15, 1985.

The Mizoram Accord was signed between the then Congress government at the Centre and the Mizo National Front in 1986 with an aim to end insurgency and violence in Mizoram.

The signing of both the Assam Accord and Mizoram Accord took place when Rajiv Gandhi served as the prime minister of India.

Rahul Gandhi had earlier stated on Twitter that this week he will pay attention to the many incredible achievements of his father as a mark of celebrating his 75th birth anniversary.