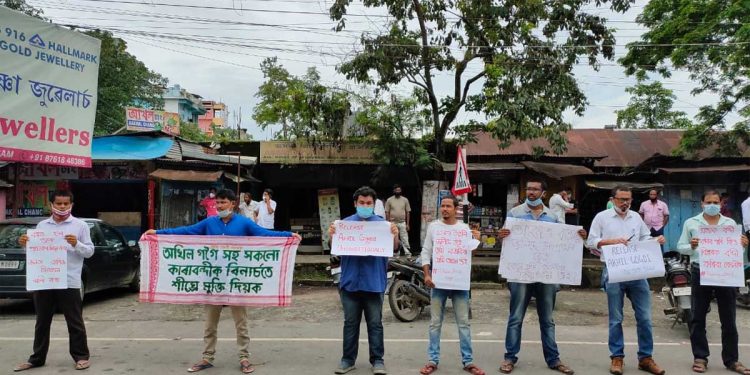 Members of the Jorhat district Committee of Satra Mukti Sangram Samiti ( SMSS) along with other organizations staged a demonstration on Wednesday, demanding the release of Krishak Mukti Sangram Samiti leader Akhil Gogoi and others who have been jailed for protesting against the Citizenship Amendment Act 2019 in December 2019.

SMSS is the student wing of Krishak Mukti Sangram Samiti.

Jorhat district unit SMSS President Bhairob Bora and secretary Dhanjit Baishya said that the organisation was also demanding proper treatment of Akhil Gogoi who has been ailing for some time.

Akhil Gogoi, the firebrand leader of KMSS who was arrested on December 12 at Jorhat for active participation in anti CAA protests and has questioned by the NIA.

Bhoirab Bora said that Akhil Gogoi who was ailing for quite some time now should be released and be given proper treatment in a hospital.

The students’ organization also demanded the release of Dharjya Konwar, Bittu Sonowal, Manas Konwar and Jawaharlal Nehru University student from Assam Devengana Kalita, all of who have been arrested and jailed for alleged involvement and fomenting unrest by protesting against CAA.