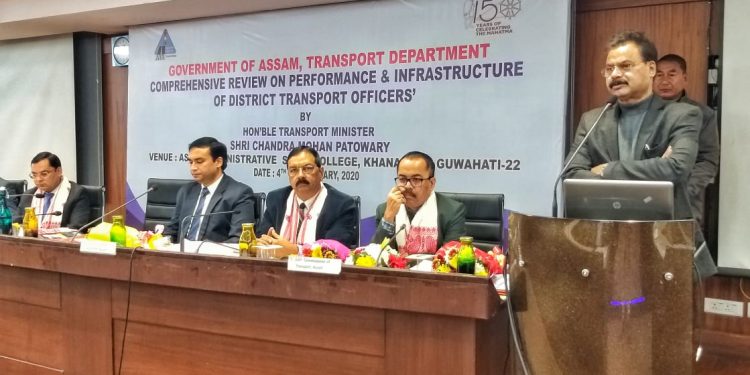 In the meeting, the minister asked the DTOs to render quality service for development of transport sector in the State.

He urged the officers to work for creating a legacy in improving their service to the people.

‘Innovate, inspire and influence so that people remember your good work,’ said the minister.

He also called upon the officers to strive for a success story in one’s life which act as a stimulus and joy for one’s future endeavours.

Patowary added all officers must work to meet the objectives of the department which is to generate revenue for welfare of the public, ensure safety on road and earn respect for the department.

Patowary said the Department would soon look into the matter of weighbridge to check overloading vehicles.

He told that necessary measures would be taken for better infrastructure of the offices with similar-looking new office buildings.

He also directed the DTOs to apprise the issues faced by them in the field to the Commissioner, Transport.

He strictly directed the district officers to abstain from giving fitness certificate without verifying the vehicles which may result in pollution, road fatalities and other hazards.

Patowary asked the DTOs to take all necessary measures to meet the revenue target of the respective districts during the financial year.

He directed the concerned officers to go out of their offices for strict enforcement of the Motor Vehicle Act and Rules and to fine the rule violators accordingly.

He told that such measures would ensure road safety and also increase revenue.

He warned that stringent steps would be taken against officials for negligence in enforcing Motor Vehicle Acts and Rules and in collection due revenue.

The minister also asked each DTO their problems like shortage of manpower, office infrastructure etc and the support they require in performing their duties efficiently.

Patowary asked the DTOs to take up with district authorities for speed breakers at critical road junctions and conduct awareness campaigns in educational institutions on road safety.

Accident prone areas on roads and highways must be identified in coordination with police, PWD and district authorities for minimizing road accidents.

Patowary also distributed SIM cards to DTOs which would be the permanent numbers of their respective district offices irrespective of the officer’s posting and transfer.

Dr K K Dwivedi, commissioner and secretary of Transport Department, asked the DTOs to maintain a good relationship with police, transport associations, district administration for better services to the people.

Adil Khan, commissioner, Transport stated that a toll free number would be allotted for Transport Department and panic button and GPS tracking of buses would soon to be installed for benefit of the general public.