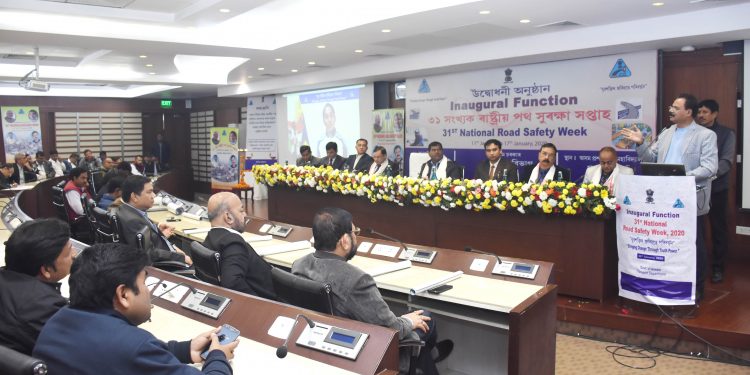 The Road Safety Week will be observed till January 17 all across the country.

This year’s theme by the Ministry of Road Transport and Highways is ‘Bringing change through youth power’.

“In this direction, transport officials must enforce vehicles prioritizing on road safety only,” the minister added.

The minister also asked the department officials to conduct refreshment course for drivers.

“There must be a mid-point driver’s station so that sleep-driven drivers can alter drivers for long journeys to prevent accidents,” he said.

Patowary advocated the idea of planting a sapling on purchase of a new vehicle to maintain the ecological balance.

He said that SEBA has already introduced a chapter on road safety in high school level for sensitizing students.

“The Transport Department will soon institutionalize Path Suraksha Bahini – volunteers as first respondents during accidents and will conduct residential training for them,” he said.

In this context, Patowary distributed identity cards to five such volunteers of Kamrup (Metro) district.

Commissioner of Transport, Adil Khan mentioned that life and death is not in our hands, but road safety measures are surely in our hands which will go a long way in ensuring safety on the roads.

He requested the public not to damage the metal crash barrier in the dividers as it helps in preventing accidents in the median openings.

A street play was also staged to mark the observance of 31st National Road Safety Week.