Protests against Citizenship Bill back in Assam 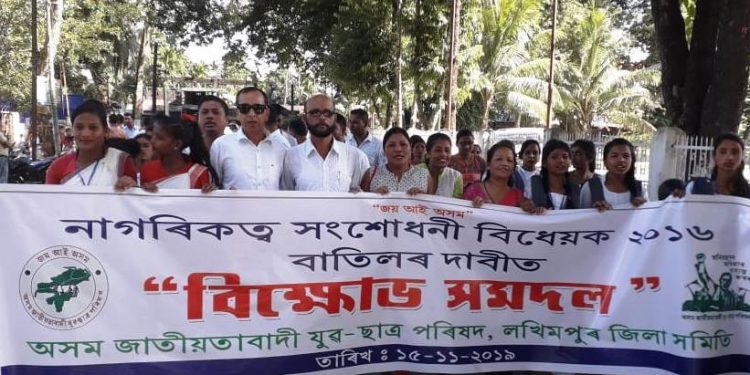 Hundreds of protesters under the banner of the AJYCP on Friday take out a protest rally in North Lakhimpur. (File image)

People in Assam once again took to the streets against the contentious Citizenship (Amendment) Bill.

Hundreds of protesters under the banner of the Asom Jatiyatabadi Yuva Chatra Parichad (AJYCP) on Friday took out a protest rally in North Lakhimpur demanding immediate scrapping of the Bill.

The Centre is likely to introduce a fresh version of the Citizenship (Amendment) Bill during the winter session of Parliament which will begin on November 18 and end on December 13.

The rally, which was started from Tyagkshetra of the town, culminated in front of the deputy commissioner’s office.

“In no way we will accept the CAB as it is a threat to democracy and the linguistic, cultural and geographical set up of Assam,” AJYCP leaders Mandeep Neog and Jyoti Das said in a statement.

In Jorhat also, the organisation took out a protest rally against the Bill.

An AJYCP member said that the people of Assam should oppose the Bill at all costs if the Assamese do not want to become a minority in their own state.

He further said that the Bill would pave the way for large scale migrations from Bangladesh and Assam will have to bear the burden of a huge migrant population.

“The people of Assam and the northeast should oppose the Bill tooth and nail  if they want to survive” he said.

The Bill was passed by the previous Lok Sabha in January but not taken up in the Rajya Sabha following protests in Northeast and resistance of the main opposition Congress.

The Bill seeks to amend the Citizenship Act, 1955, and grant citizenship to Hindu, Sikh, Buddhist, Jain, Parsi and Christian immigrants from Pakistan, Bangladesh and Afghanistan who have illegally migrated into India.

Home minister Amit Shah had already announced that the government would introduce the bill before implementing the National Register of Citizens.