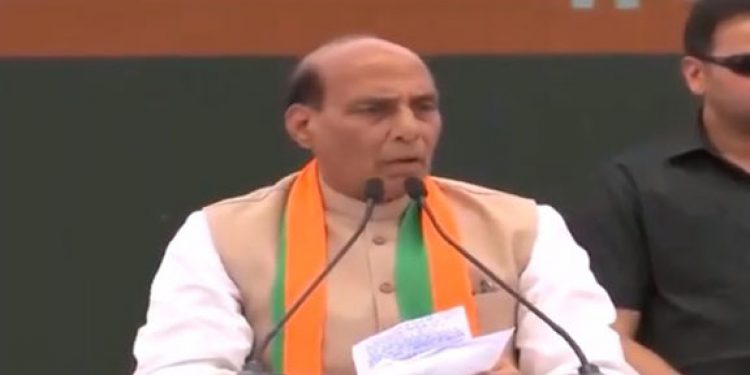 The Bharatiya Janata Party (BJP) on Monday reiterated that it will bring the Citizenship Amendment Bill (CAB), if it again comes to power after the election.

Union home minister Rajnath Singh said the BJP-led NDA government will get the Citizenship Amendment Bill passed in the Parliament if it voted to power.

“We will try to pass the Citizenship (Amendment) Bill in the Parliament and we will also preserve identity in the region,” said Singh while releasing the election manifesto of the BJP.

With hardly a few days left for the first phase of polling, BJP released its election manifesto at the party headquarters in New Delhi.

“We are committed to the enactment of the Citizenship Amendment Bill for the protection of individuals of religious minority communities from neighbouring countries escaping persecution. We will make all efforts to clarify the issues to the sections of population from the northeastern states who have expressed apprehension regarding legislation. Hindus, Jains, Buddhists and Sikhs escaping persecution from India’s neighbouring countries will be given citizenship in India,” said the manifesto.

BJP’s election manifesto has come into direct confrontation with the Congress over the CAB. The Congress in its manifesto has said that it will repeal the controversial Bill, if it comes to power.

Ever since the issue of Citizenship (Amendment) Bill has come to the fore, controversy and chaos erupted especially in the northeastern states. The last session of the Parliament also witnessed chaos over the CAB.

Although the Citizenship (Amendment) Bill, 2016 was passed in the Lok Sabha on January 8, 2019, it lapsed in the Rajya Sabha.

In fact, Asom Gana Parishad (AGP) had earlier snapped its ties with the BJP over the Bill. However, BJP and AGP again came to an understanding ahead of the coming general elections.