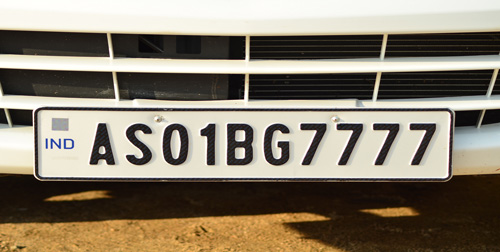 All motor vehicles, commercial or private registered in the State or district prior to February 24, 2012 (old vehicles) will have to affix a new High Security Registration Plate (HSRP) on their vehicles before August 31, 2018 as informed by the District Transport Officer of Dima Hasao.

“As the affixing of HSRP in Dima Hasao was started from June 10, 2014, those new and old vehicles registered in Dima Hasao on or before June 10, 2014, yet to affix the high security registration plate are to procure the number failing which legal action will be initiated as per Act and law,” stated a government press communiqué.

It may be mentioned that this is in implementation as per Supreme Court of India by which affixing of High Security Registration Plate in number plate in all types of vehicles was made mandatory. “The Transport Department of Assam has accordingly taken appropriate steps for implementation of HSRP as per amendment of Rule 50 of Central Motor Vehicles Rules, 1989,” it added.

As the name suggests HSRP is a high security number plate which forms a uniform pattern of displaying one’s vehicle’s registration number throughout the country.

The HSRP plates which are made of aluminum. There are unique details in the number plate other than the registration number itself.

Featuring a unique 7-digit laser code, in a HSRP, a chakra hologram is there to prevent counterfeiting, a self destructive sticker with engine and chassis number of your car.

In blue colour, ‘IND’ is inscribed in such number plate.