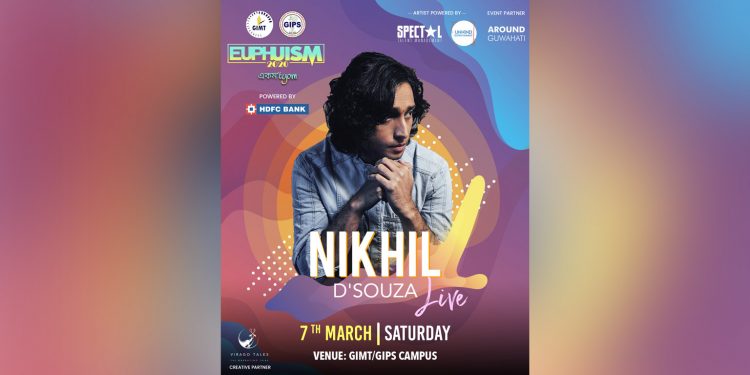 Girijananda Chowdhury Institute of Management And Technology (GIMT) is all set to host Euphuism, its annual cultural fest from March 5 to March 7.

Euphuism, the nonpareil fest of GIMT, is an exceptional portrayal of a cultural display with a hint of technological innovations echoing in waves of fun and excitement.

There is not a thing you would not find in this event; it has got all the elements starting right from having fun to addressing the prevalent topics in society, to undertaking skill development camps in orphanages.

This year, the main artist of the effervescent event will be famous Bollywood singer, lyricist and guitarist Nikhil D’Souza.

He is best known for the songs Mere Bina (Crook), O Gujariya (Queen), Shaam (Aisha) among others. He will be performing on March 7.

Nikhil, who is now signed to East West Records of Warner Music UK, has released three songs, which include Silver and Gold and Beautiful Mind.

His music has a distinctive Filmi, Indie pop, Alternative rock, Pop music, folk styling to it.

The main attraction of the fest will be The Local Train- famous for it’s hit singles such as “Aaoge Tum Kabhi” and “Choo lo”.

Along with The Local Train, many local artists and DJs will also entertain the crowd.

EUPHUISM’s main attraction last year was Zubeen Garg and the festival had an overwhelming footfall of over 7,000.

The organisers are hopeful that the festival this year will have a footfall of over 10, 000.