Most of her wines are crisp, sweet and semi-sweet and colours range from clear amber, rose, black and blue. The wine made from phalap tea also leaves a smoky after taste 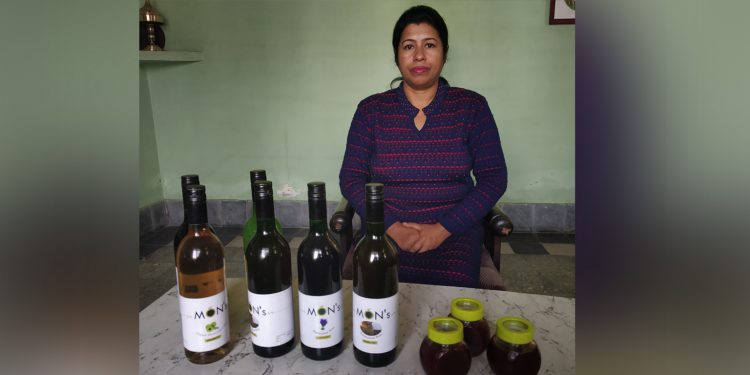 Brewing wine is considered to be a science and there are a few who have mastered this science.

Monimala Borah, a resident of Tillikiam area in Jorhat district, however, has turned this science into a form of art!

Made with lavender sourced from Kashmir, Phalap tea from Singpho land in Assam, juicy strawberry from Meghalaya and the solid wood apple, Monimala churns out a mindboggling array of delectable wines and blends from both exotic and common fruits and flowers.

Having started out about three years ago on a trial basis with the common tenga mora, the intrepid housewife turned entrepreneur has created a niche market for herself.

Her clientele base is drawn mostly from the tea and business communities.

The Balipara Foundation had recently invited her to display her concoctions and this has also widened her base.

Monimala has already made wine with locally available fruits like the Indian blueberry, (Jamun) mango, amla, banana and olive.

Most of her wines are crisp, sweet and semi-sweet and colours range from clear amber, rose, black and blue.

The wine made from phalap tea also leaves a smoky after taste.

“I would like to try making some wine with mulberry but these are not available in Assam with only a few old trees growing here and there,” she said.

“I have asked a farmer to grow mulberry trees over a large area and that I would buy all that he produces, ” she added.

But this does not mean that she has stopped experimenting or diversifying.

Monimala, a mother of two, is currently focussing on brewing wine from luscious oranges sourced from the best orchards of Arunachal Pradesh.

Not satisfied with only making wines she has now come up with a batch of mouthwatering chilli jam.

So where did she learn how to make such a wide variety of wines.

“Here and there. There is no training in winemaking in India and the minimum training that is available is also costly. Just the introduction costs Rs 60000,” she said.

“My first batches were trial and error. I took a training imparted by a Chinese team once in Bangalore,” she said.

“My friends helped me to access equipment from abroad, which are quite costly and even a few ingredients which go into the making of the wines,” she added.

“The huge consignment of lavender was also sent by friends from Kashmir,” she added.

Regarding the shelf life of her wines, Monimala said that unlike the wines made with grapes in Italy that last 10 years or so, hers should be consumed within a year and the bottle refrigerated if opened.

“I do not add any preservatives in order to retain the true taste and it is through experiment that I’ve found out how long they would last,” she said.

I have not taken the help of any laboratory but my own equipment to test the purity as well as alcohol content which is not more than 9,” she said.

Regarding her plans on expansion, she said that the procedure to get a government license was difficult and costly.

“I would have liked it if the state government helped me out in this,” she said.

“Making such wines on a large would mean using up the large variety of local fruit which grows so abundantly in this region,” she added.

It would also mean employment to a lot of women and economic growth, ” she added.

Monimala said that while weaving, handicrafts and pickles from local fruit varieties were promoted she wanted to do something different but the government was yet to help her endeavour which would also mean the development of mostly unused resources here.

“There are so many things here. I’m eyeing the Assam lemon, kunji thekera and ou tenga to add to my range,” she said.

At present Monimala limits herself to making batches of 30 litres of wine which she bottles under the brand, Mon’s.