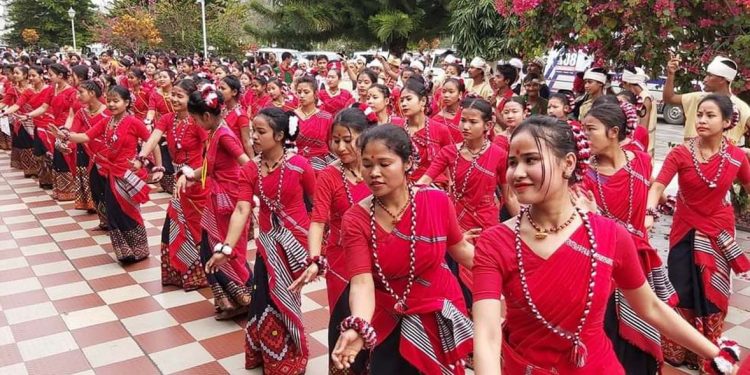 The Mising community of Assam on Wednesday celebrated Ali Aye Ligang festival across the state with much funfair.

Ali Aye Ligang is a spring festival associated with agriculture, specially with the beginning of the Ahu paddy cultivation.

The festival marks the onset of sowing seeds.

Along with other parts of the state, the Mising community in Dibrugarh also celebrated the festival with traditional customs and rituals at Murong Ghar.

“Every year, we celebrate the festival with traditional customs and rituals. Ali Aye Ligang festival is a restricted holiday in Assam. We are the indigenous tribe of Assam,” said Jyotish Kumar Patir, a youth from the Mising community of Dibrugarh.

“The BJP-led Sarbananda Sonowal government in Assam calls their government as the government of indigenous people. So, we demand that state holiday be declared on Ali Aye Ligang,” Patir said.

Meanwhile, the Laika-Dodhia villagers, who belong to the Mising community, restricted themselves from celebrating the festival.

“We are the indigenous people of Assam, but still we are fighting for our existence. The government has decided to relocate us but we are not happy to go to that place,” said a villager of Dodhia.

Ajay Doley, assistant general secretary of Takam Mising Porin Kebang (TMPK), Tinsukia district said, “The government has taken steps to rehabilitate Laika villagers in Namphai and Pharpur areas of Tinsukia and for Dodhia villagers, the government had chosen a place in Lakhimpur district. But the villagers are not willing to shift to the area in Lakhimpur as the area is flood-prone.”

“The villagers staying in Tinsukia makeshift camp abstained from celebrating the festival because they have been neglected by the government,” said Doley.

The festival was also celebrated across the Lakhimpur district with pomp and gaiety.

A central event, organized by the directorate of cultural affairs, Assam was held at the Charu Chandra Doley Kshetra of Brahmaputra College at Bokulguri in Dhakuakhana.

In his speech, chief minister Sonowal said he was proud of the Mising community for its vibrant cultural disposition.

He stressed on use of agricultural practices, developed by the earlier generations, to improve production for global markets.

“Mising community, which has produced great minds like Mrinal Miri has all the talents, capabilities and skills to would progress and contribute towards a sustainable development with amity and harmony,” said  Sonowal.

In his speech, Dr Doley spoke about the preservation of cultural identity.

Sakuntala Doley Gamlin, commissioner of the central government and the first IAS officer from the Mising community, was felicitated at the event.