Baksa has registered 125 Covid19 positive cases so far with 1 death; the district currently has 103 active cases 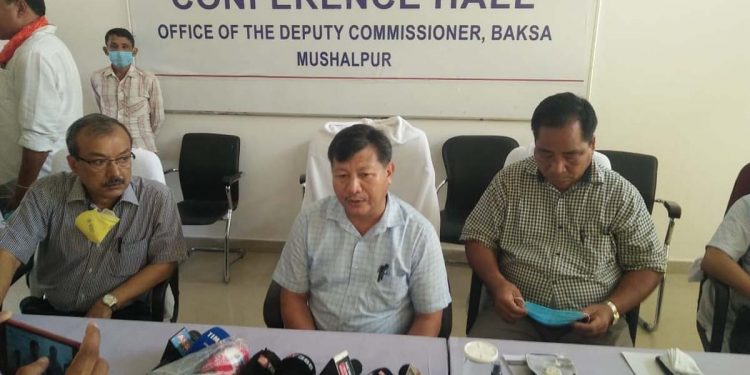 The migrant workers, who have returned to the state from other parts of the country due to the Covid19 pandemic, will get job cards and will be engaged at works under the MGNREGA.

This was announced by Assam tourism minister Chandan Brahma in a press conference during his visit to the Baksa district on Saturday.

Minister Brahma asked the block development officers (BDOs) to expedite the process of distributing job cards to the migrant workers under the MGNREGA.

He emphasized on engagement of migrant workers under various government schemes meant for rural development.

Brahma visited Mushalpur, the district headquarters of Baksa, to review the Covid19 situation in the district.

He also inspected the medical facilities being offered in the district by the health department under the supervision of the district administration.

Chandan Brahma has been engaged by the Assam government as the new minister in-charge of Baksa district.

In the meeting, minister Brahma took stock of the health facilities provided in the district’s quarantine centres.

He heard the problems being faced by the health department in the district due to lack of doctors and other health workers and scarcity of VTM kits for swab tests.

The minister assured of taking necessary steps to solve the issues of the health department in the district.

A total of 1,200 people have been kept in 31 quarantine centres set up by the Baksa district administration in the entire district including, out of which 125 have tested positive for Covid19 so far and one patient died of the virus.

A total of 22 Covid19 patients in Baksa have been discharged from the hospital after they recovered from the disease and the district currently has 103 active cases.

The minister asked the circle officers and food & civil supply officials to speed up the distribution of rice to the needy people.

He asked officials to attend the next review meeting to be held on Tuesday at Tamulpur.

The heads of other departments were also present in the district.