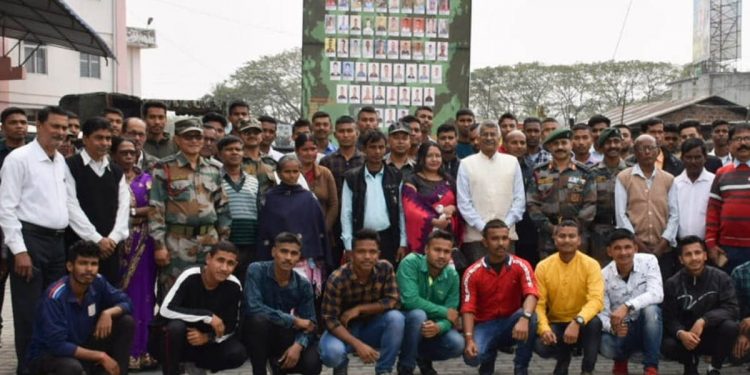 A total of 81 youths from Lower Assam have joined various regiments of the Indian Army to serve the nation.

They were inducted into the Indian Army after being trained.

On being inducted into the Indian Army, the youths were felicitated at a programme organized in the Nalbari Army camp under Assam’s Nalbari district.

The youths grew with lack of proper facilities and belonged to families not financially sound and had less avenues and resources.

But they were focused and dedicated in line with the rich heritage and illustrious history of Assam and they were highly motivated to serve the nation by joining the Indian Army.

The coin of fortune switched recently for these youth when the Indian Army facilitated them by virtue of organizing pre-selection training for joining armed forces.

The physically and mentally robust youth of lower Assam were trained for induction into the Army.

The zeal and self-determination of these youth resulted in majority of them clearing all the tests that the selection committee has set for them.

The news of this exceptional performance of youths of lower Assam sent a wave of happiness and confidence among the local populace.

In addition to the Indian Army authorities, the felicitation was attended by BB Dev Choudhury, deputy commissioner of Nalbari and the proud parents of the freshly recruited youth.

The nalabari deputy commissioner and the parents expressed their gratitude to the Indian Army for giving opportunity to the youth thus ensuring their constructive engagement towards nation building.