Lockdown: Vegetable to be sold at 7 designated points in Guwahati from Friday

Keeping in view of the scarcity of vegetable due to lockdown, the Kamrup Metro district administration has decided to arrange selling of vegetable at 7 designated points in Guwahati from Friday.

In an order, issued by the deputy commissioner of Kamrup Metro district, it was mentioned that the discussion was held under the chairmanship of minister Chaudhury in presence of additional chief secretary to food civil supplies & consumer affairs department, Assam.

Also read: Grocery shops in Assam to remain open from 8 am to 7 pm

The order said: “In view of present prevailing scarcity of vegetable the Food Civil Supplies & Consumer Affairs, Govt of Assam has arranged to sell vegetable in the following designated points” with effect from March 27, 2020 and onwards under the supervision of area officer of FCS&CA, Kamrup Metro and the officials of Legal Metrology. 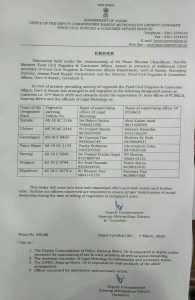 According to the order, the designated vegetable points will be set up at Six Mile, Ulubari, Ganeshguri , Fancy Bazar, Narengi, Maligaon, and Silpukhuri.

Stating that this order will come into force with immediate effect, the Kamrup Metro deputy commissioner said it will stand until further order.

“Further the officers concerned are requested to ensure proper maintenance of social distancing during the time of selling of vegetables at designated point,” the order said.

While announcing lockdown in Assam on Monday a day before Prime Minister Narendra Modi’s announcement of 21-day lockdown, state finance minister Himanta Biswa Sarma had said all markets and shops except groceries and pharmacies would remain closed during the lockdown period.

The 21-day lockdown has been imposed across the country as a preventive measure to contain the spread of coronavirus.