At a time when the NGT and State Pollution Control Board have issued restrictions on firecrackers this Diwali, Assam minister Himanta Biswa Sarma on Tuesday said there will be no such restrictions.

The National Green Tribunal (NGT) imposed a total ban on sale and use of firecrackers in Delhi and adjoining areas with effect from midnight of November 9-30.

The NGT said the ban on firecrackers will be applicable to all “cities and towns where the average ambient air quality in November last year was poor or worse”.

Only green crackers, which are considered to be less polluting, will be sold in cities and towns where air quality is “moderate”, the tribunal said in its order.

In line with the NGT ban, the State Pollution Control Board (PCB) of Assam also ordered for a total firecracker ban to curb high air pollution in Guwahati which is marked as “poor” quality in Air Quality Index (AQI).

The State PCB order said: “Except Guwahati, in other areas, only green crackers can be sold and bursting is allowed only for two hours during Deepawali festival from 8 pm to 10 pm; during Chatt Puja from 6 am to 8 am and during Christmas & New Year eve from 11.55 pm to 12.30 am”. 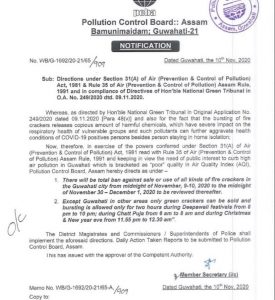 However, putting aside all such orders, health minister Sarma on Tuesday said with the improvement in Covid19 situation in Assam, the Hindus will be able to celebrate this Diwali as there would be no restrictions on use of firecrackers in the state.

“Like any other religion, Hindus have the right to celebrate festivals. With improvement in #COVID19 situation in Assam, we plan no restrictions on celebration of #Diwali including use of #Firecrackers,” health minister Sarma tweeted.

“However, kindly remember, self-restraint is key to combat #COVID19,” he added.

Amidst pandemic and government & NGT orders restricting the use and sale of firecrackers, the health minister’s announcement has confused the people of the state.

A section of the people is of the opinion that health minister Sarma, who is also the convenor of BJP-led  North East Democratic Alliance (NEDA), made the announcement just to garner support from the Hindu voters ahead of the state Assembly elections 2021.