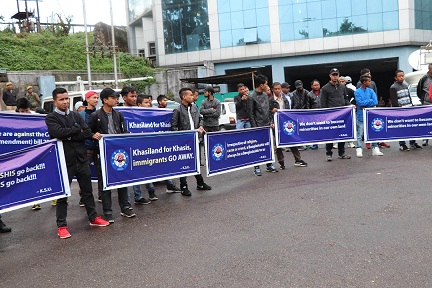 The Centre has put on hold the highly anti-indigenous people Citizenship (Amendment) Bill, 2016. Meanwhile, the Joint Parliamentary Committee (JPC) on the Bill has prayed for time to table its report in the Parliament till the coming Winter Session.

Interestingly enough, the JPC has mooted the idea of more discussions with stakeholders before arriving at a decision on the Bill. Likewise, there is no dearth of political and other bigwigs, mainly from the saffron camp, who have spoken in the same tune.

At this juncture it may be pertinent to state that the term ‘stakeholder’ is a high sounding term providing an interpreter enough leeway to project fake and bogus stakeholders as real stakeholders while causing the genuine ones to fall by the wayside. In that backdrop, it is the avowed duty of the JPV to clarify as to what it means by such bombastic term as ‘stakeholder’.

Are the people of the Brahmaputra Valley not real stakeholders in the eyes of the JPC so far as the controversial Bill is concerned? Or does the JPC deem the multi-ethnic, multi-religious, multi-linguistic and multi-cultural residents of this valley as lesser stakeholders or still worse, as not worth listening to? Or else why did the JPC during its last visit to Assam allotted 2 days of hearing to the 3 districts of the Barak Valley and only 1 day of hearing to the 30 districts of the Brahmaputra Valley? It is highly shameful and despicable, and yet the JPC needs to be told that as per lower primary school arithmetic, if the 3 districts of south Assam could have 2 days of hearing, the  rest of the State comprising 30 districts is entitled to 20 days of hearing.

From such ordinary arithmetical standpoint, the JPC owes the Brahmaputra Valley 19 more days of hearing. The contention made would hold good if, of course, the Committee has even the slightest of respect in the matter of equality towards all as envisaged by the Constitution of India. As of now, the fiasco enacted by the JPC in Assam is highly ludicrous and condemnable – a despicable reflection of how hollow the much-hyped slogan of ‘saab ke saath saab ka vikash’ could be.

What is a lot more shocking is the stony silence maintained by Chief Minister Sarbananda Sonowal over the blatant discrimination crudely exhibited by the JPC towards the people of the Brahmaputra Valley. Beyond a shadow of doubt, from the standpoint of number of hearings, the attitude displayed by the JPC towards the greater Assamese society is one of utter contempt.

However, the silence religiously maintained by the CM over the misdemeanor of the JPC by way of neglect and discrimination of the Brahmaputra Valley, causes one to seriously contemplate if he has the authority to even whisper a word on such issues or if he is under compulsion to simply take dictation from Delhi and some other quarters.

On the other hand, so far as the Bill is concerned, prior to June 30, which indeed was the earlier date for publication of the final draft NRC, the CM had gone on record stating that he would comment on the Bill after publication of the draft. However, one month later, on July 30 the final draft NRC was published. Since then over a month has elapsed and the CM continues with his ‘maun brat’ on the obnoxious Bill.  In any case, one fails to comprehend as to how the final draft NRC could be in any way related to the extra-constitutional Bill. One wonders as to what could be the ulterior motive of the CM in putting the Bill and the NRC in the same basket.

With unabated influx from Bangladesh over the decades, Assam is infested with Bangladeshi nationals (both Hindus and Misaims) and the 6-year long historic Assam Movement culminating in the signing of the Assam Accord were centred around detection of foreigners, deletion of their names from the voters’ list and their deportation from Assam (3 Ds). Since the beginning of the Assam Movement, for nearly four decades now, the people of the State have been demanding deportation of foreigners. To cut a long story short, the NRC updating exercise and the publication of the final draft NRC is only a partial fulfilment of the 3Ds demand.

Again, so far as the foreigners issue is concerned, the JPC may be bluntly told that Assam is the only State in India where the people have been struggling for decades together for detection and deportation of foreigners (mainly Bangladeshis – both Hindus and Muslims). Further, the fact that the anti-foreigners movement was mainly based in the Brahmaputra Valley on account of the presence of large number of foreigners, in the fitness of things, this valley deserves a few more hearings than the mathematically determined 20 days. While the JPC has only enacted a fiasco in the guise of hearing, the CM’s silence on the misdemeanour is like adding salt to wound.

So far as the use of the term ‘stakeholder’ by the JPC is concerned, one may have the audacity to ask the JPC that if the bulk of stakeholders are not in Assam, where are they to be found? Gujarat, Rajasthan, Madhya Pradesh et al? Are the people of any State, other than Assam, even aware of as chronic a problem as foreigners problem?

The JPC must bear in mind that it is the national interest, and not that of any party, that is paramount. And national interest cannot be served by sidelining the interest of Assam that has been plagued for decades together by the presence of foreigners.

The Bill itself goes against the interest of the nation on two counts. Firstly, Assam, which is already infested with the presence of huge number of foreigners, needs their immediate deportation after their due detection, leave alone further accommodating crores of Hindu Bangladeshis from across the border.

Secondly, on the national front, with limited resources, India is already witnessing an explosion of population. With vital factors like land or employment avenues running short, the nation has been failing to acquire the required level of development. Bringing in a few more crore people can worsen the fragile economy further, leading to smoldering discontent.

Despite possibly fully apprehending the highly disturbing scenario that may emerge, the fact that the saffron brigade has undertaken the exercise of the controversial Bill causes one to suspect that a hidden motive could constitute the undercurrent of the Bill. One is bound to suspect that the gain that the ruling party is trying to extract from the Bill could only be political in terms of foreigners (mainly Hindu Bangladeshi) vote bank.

For sure, if the Bill becomes an Act and crores of Hindu Bangladeshis make their way to Assam, the State’s social, cultural, economic and linguistic base, in all possibility, vanish into the blue in no time. Looking at the issue from the political standpoint, one can apparently comprehend as to why the JPC treated the Brahmaputra Valley with such contempt as to deny it its minimum share of 19 more days of hearing.