In an unprecedented move, Assam Government on Wednesday evening issued a notification temporarily suspending mobile internet and data services in several districts of the State.

The districts where this restriction has been imposed from 7 pm are Lakhimpur, Dhemaji, Tinsukia, Dibrugarh, Charaideo, Sivasagar, Jorhat, Golaghat, Kamrup (Metro) and Kamrup (Rural).

The notification has been issued by Kumar Sanjay Krishna, additional chief secretary, Home and Political Department. 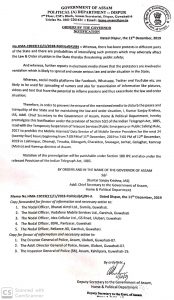 The promulgation of the notification is under the provision of Section 5(2) of the Indian Telegraph Act, 1885.

According to the notification, mobile internet and data services of all mobile service providers have been suspended for the next 24 hours in these districts.

The notice further said violation of the promulgation will be punishable under Section 188 of the IPC and also under the relevant provision of the Indian Telegraph Act, 1885.

The notification stated that in view of the widespread protests across the State against the Citizenship (Amendment) Bill, and the information and developments are widely circulated in all forms of media.

Earlier on Tuesday, the Tripura government suspended internet and SMS services in the State for 48 hours.

A notification stated that the decision to shut internet and SMS facilities was taken after state police found rumours being mongered about ethnic clashes between tribal and non-tribals in Manu and Kanchanpur areas.