Terming CAA ant-Assamese, the protesters said the state government is ignoring the main issues and are running after "insubstantial" ones 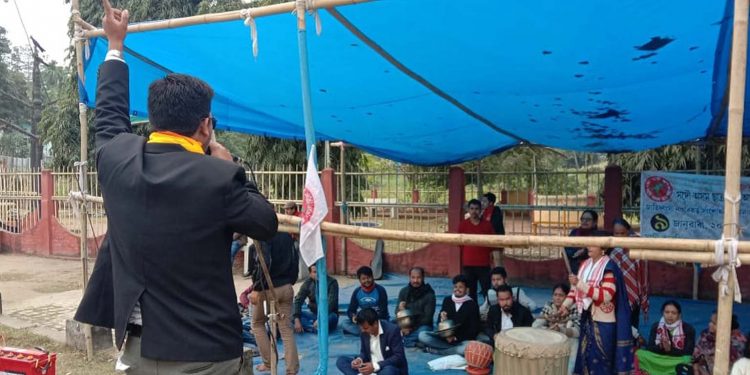 People from all walks of life including students and activists participated in the anti-CAA programme called ‘Ranashinga’ (war bugle/horn) in Diphu on Thursday.

‘Ranashinga’ was planned by the All Assam Students’ Union (AASU) and the artistes’ fraternity in which people were asked to bring an indigenous musical instrument and stage protest against CAA.

The central programme was held in Guwahati where apart from prominent AASU leaders, several popular and renowned singers and musicians participated.

In the programme organised at the Samson Sing Ingti Memorial Park in Diphu, student-activists of the All Karbi Anglong Students’ Union (AKASU) and AASU participated along with the locals.

The footfall, however, was not up to the expectation and the overall turn out was low.

AKASU vice president Shymanta Gogoi lamented the fact that people did not come out in large numbers and he urged the people to come out in numbers the next time.

“I request every individual to come out and protest against CAA. We should remember that CAA threatens our indigenous identity,” he added.

AKASU general secretary Sorjon Hanse also echoed Gogoi’s sentiments, and said, “Even though the turn out is not as we expected, but I am sure soon more people will join us.”

Terming CAA ant-Assamese, the protesters said the state government is ignoring the main issues and are running after “insubstantial” ones.

“Instead of trying to implement CAA, the state government should put emphasis on developmental issues,” said
Rabin Goswami, a protester.

“Issues like unemployment, reviving the closed paper mills of the state are more important than this Act, which is against the spirit of Assam Accord,” he added.

Gita Bora, another protester in her mid-sixties, slammed the Assam government for imposing CAA and said it has insulted the 860 martyrs of Assam Agitation.

“A number of youths from Karbi Anglong were martyred during the Assam Agitation. Why did they die for? CAA insults their supreme sacrifices,” she reiterated.

“This fight is for our language and our identity as CAA threatens both,” she further said.

“If our language becomes secondary then we will have no place to hide our heads in shame. CAA has to go if the Assamese language and culture has to survive,” she reiterated.