Himanta Biswa Sarma to take oath as Assam CM today; who will be included in his ministry? 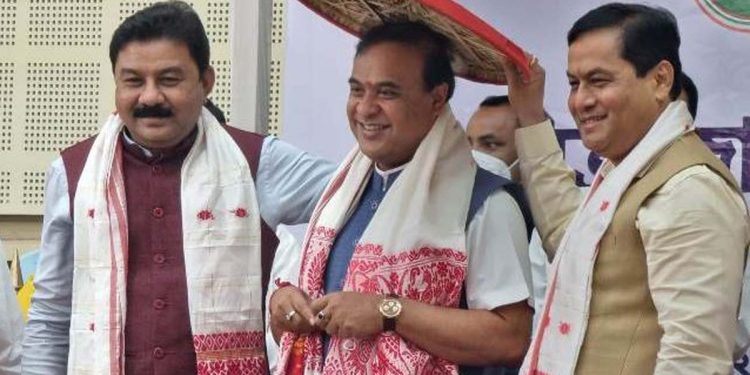 The swearing-in ceremony will be held at the Srimanta Sankardeva Kalakshetra at 11:30 am.

Himanta Biswa Sarma, who served as the finance, health education and PWD minister during the Sarbananda Sonowal-led ministry, was elected as the leader of the BJP Legislature Party on Sunday.

Sarma, accompanied by former chief minister Sarbananda Sonowal along with other MLAs met Assam Governor Prof Jagdish Mukhi on Sunday and staked claim to form the government in the state.

After being elected as the leader of the BJP Legislature Party, preparations are on to form the new ministry under Himanta Biswa Sarma.

Speculations are doing the round over the possible faces to be included as ministers in the Cabinet under new chief minister, Himanta Biswa Sarma.

On Sunday night, Himanta Biswa Sarma and the BJP leadership had discussions with the leadership of coalition partners Asom Gana Parishad (AGP) and United People’s Party Liberal (UPPL) in the Circuit House at Amingaon.

All factors including representation of various communities, capabilities and closeness to the new chief minister are being considered for induction in the ministry, sources said.

Some faces may also get place in the new ministry as per the advice of the BJP’s central leadership.

In the first phase, there is possibility that two ministers from the AGP and one from UPPL may take oath on Monday.

Request your gracious #Virtual_Presence on the occasion of the swearing in of Dr. @himantabiswa as Chief Minister, Assam at 11.30 am on Monday, the 10th May, 2021 at Srimanta Sankaradeva International Auditorium, Kalakshetra, Ghy.