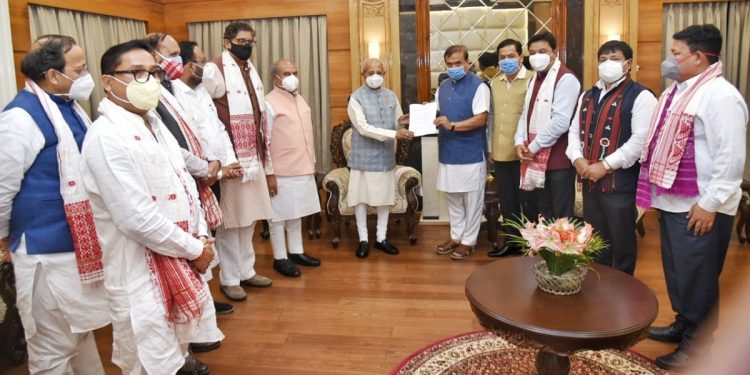 Other top leaders of the NDA partners including AGP president Atul Bora, UPPL president Pramod Boro were also present in the meeting with the Governor at Raj Bhawan in Guwahati.

BJP strongman in the Northeast, Himanta Biswa Sarma will take oath as the new Chief Minister of Assam tomorrow (Monday, May 9).

The oath taking ceremony will take place at the Srimanta Sankardev Kalakshetra in Guwahati on Monday at 12pm.

Along with Himanta Biswa Sarma, who will take oath as the new Chief Minister of Assam, several other MLAs are also likely to be sworn-in as cabinet ministers.

According to reports, Himanta Biswa Sarma is likely to keep the portfolios of Home, Finance and Health with himself.

Meanwhile, allies of the BJP – the AGP and the UPPL have also extended their support to Himanta Biswa Sarma as the new chief minister of Assam.

Preparations are underway at the Srimanta Sankardev Kalakshetra in Guwahati for the swearing-in ceremony.

The Kamrup-Metro district administration is ensuring that every SOP and COVID-19 protocol is being put in place for the swearing in ceremony.

“We are looking into that the ceremony is being done while maintaining every SOP, adhering COVID-19 protocols,” Kamrup-Metro DC Biswajit Pegu said.