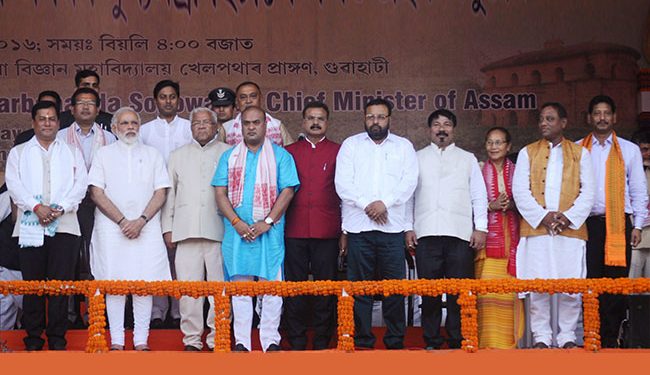 The five Assembly election results were on the expected lines save possibly West Bengal (WB). The writing was more or less on the wall that the DMK-led alliance might possibly sweep Tamil Nadu and that the CPI (M)-led LDF or Left Front may have an edge over the Congress-led UDF to retain power in Kerala. Again, the Puducherry election outcome was almost a foregone conclusion.

In the matter of WB, the state headed by Trinamool Congress chief Mamata Banerjee was perhaps the most expository one on several counts and of course witnessed one of the toughest electoral battles fought in recent history. WB needs a separate and lengthy discussion in the interest of justice.

So far as our home state of Assam is concerned, it was perhaps foolish to expect a change in the overall political landscape. While the mandate of the people is the key to government formation, it is highly desirable that the essence of democracy is firmly perched in the psyche of the electorate.

Leave alone political maturity, the majority of our electorate may have even less than skin-deep knowledge of the history & culture of Assam. The result being that deceitful & sinister political forces within & outside the state with money power in astronomical figure further reinforced by man power, both local and hired from outside the state, almost have a field day. Touts also have a busy time, adding to the perversion of democracy.

Historically speaking, dynamism was and is a slumberous element in the body politic of Assam. With mental inertia at rest, physical dormancy firmly rooted & intellectual vacuum at the political level being the hallmark of the indigenous lot, the established approach since independence has been to follow the leader.

Hero worship has all along been central to the ethos of the locals while being unwaveringly committed to swim or sink with the high and mighty Czars calling the shots from Delhi. Looking elsewhere had & has almost been sacrilegious and forbidden. The towering statements couched in the maze of swashbuckling rhetoric, laced with falsehood, foolery, fakery & foxiness, almost served as Gospel Truth for the locals.

It was only in 1977 that for the first time the ruling Congress was dethroned from power in Delhi by the Janata Party in the wake of the Emergency. While the Congress was nearly wiped out across the length and breadth of the country with the then Prime Minister Indira Gandhi suffering a humiliating defeat in the 1977 Lok Sabha polls, Assam was nailed to its traditional immovable end.

The Congress won an overwhelming majority of Lok Sabha seats while the Janata Party that romped home to the seat of power at the Centre, won in just a handful of constituencies in Assam. However, thereafter in due time when the state Assembly polls were held in Assam, the Congress lost and the Janata Party formed the government in the state in tune with the ruling dispensation at the Centre.

The political development of 1977 and the years that followed clearly prove that Assam is never the leader but always the follower. In the subsequent years, the Congress {then Congress (I)} under the leadership of Indira Gandhi once again rode back to power at the Centre.

Assam followed suit in one way or the other allowing for two terms of chaotic rule by the AGP in between with the Assam Accord (now on ventilator) serving as the life-force for the so-called regional party. It may be appropriate at this juncture to state that most ridiculously & laughably it was on the ‘Jai Aai Asom’ wagon of bubbling emotion of Assamese chauvinism sans any pragmatic political vision that the AGP captured power in the state. No wonder it has turned into an almost vanishing force now, depending on the BJP for oxygen supply for survival.

The AGP and now the AJP have proved that their opportunistic political philosophy of emotion is bound to go crashing to rock bottom. Years of hard work at the grass-root level accompanied by sacrifice is alien to their character.

Virtually sans roots among locals with the ethos of opportunism, the so-called regional forces in essence appear only to have reinforced the CAA to emerge as a hugely potent factor to usher radical changes in the political, demographic, social, cultural, linguistic, economic & population pattern of the state even to the point of the Assamese people becoming a minority in their home state in the years/decades ahead.

Further, it may almost be a certainty that the 2026 Assam Assembly polls results may be in tune with the party elected to power at the Centre in the 2024 Lok Sabha polls. As stated already, Assam only follows & never leads – a trend since the pre-independence era.

In the matter of analysis of the BJP’s victory in the recent polls to the Assam Assembly, one of the prime reasons has already been enumerated above. So far as its achievements (or lack of the same) in the last five years is concerned, the report card certainly appeared to be hazy, chaotic & cumbersome.

However, it is its long chain of freebie schemes in the garb of empowering the people that actually worked like a magnet in attracting the people to it fold while voting. After all, it was hard cash & largesse for free. The high rhetoric and sky-shattering promises of the fairy tale genre have also contributed towards attracting the electorate.

On its part, the Congress-led opposition alliance proved to be nowhere. The Congress leaders, including the Rahul-Sonia duo, need to tell that electoral dynamics is not like you wake up a few weeks before the elections and take to a high voltage campaign.

Over the decades the majority of the people have become too smart to comprehend the selfishness & falsehood behind the electoral promises made by the political class. However, in the case of freebies, the people have the tendency to react differently. In the case of the last Assembly polls, the distribution of hefty largesses by way of government schemes began a few months before the elections.

Meanwhile, the Lok Sabha polls are about three years away and time may be too short for Congress even now to begin its ground work at the grass-roots if a challenge is to be posed for the ruling NDA. It is now for the Congress to be content with a few press meets now and again or to go to the people and establish bonds afresh.

In the case of the AIUDF, the party must come out of the communal framework. Slogans based on ‘lungi, daarhi & topi’ et al can only make the political, particularly the electoral, landscape communally volatile.

In this respect, there seems to be no difference between the AIUDF and the BJP with its aggressive Hindutva. Perhaps the AIUDF is still to realise the damage it has seemingly caused to the winning prospect of its alliance partners in the recent polls.

Of the two new regional political outfits, one feels that they only turned out to be vote-cutters. While the AJP even failed to open its account, the firebrand peasant leader Akhil Gogoi of Raijor Dal alone scripted a resounding victory. One can safely say that that it is long years of contact with the people that brought him victory with flying colours.

While big money plays a huge role in India’s electoral politics, the ‘vote-cutter’ tag generally arouses negativity inkling in the public mind. One may only say that the opposition could learn from the hard work put in by Mamata Banerjee from the grass-root level in the wake of the not so satisfactory performance by the TMC in the 2019 Lok Sabha polls.