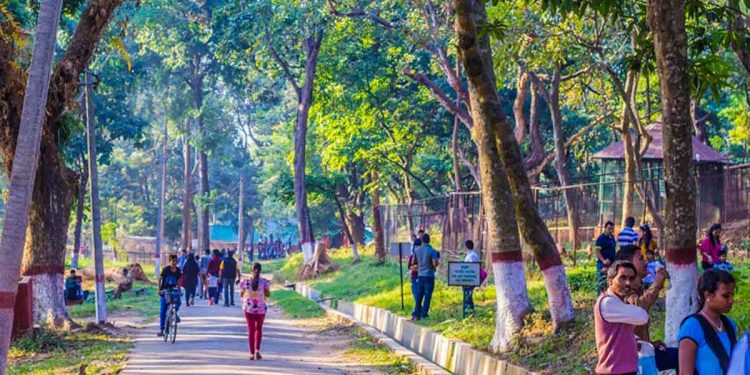 Amid protests against the Citizenship (Amendment) Act or CAA across Northeast, people in large numbers on Wednesday came out and visited several tourist places and celebrated the New Year enthusiastically.

“We oppose CAA and we will continue to oppose it tooth and nail until it is scrapped. But we also need some relaxation of the mind and hence we have come out today,” said Rashmi Rekha Das, a resident of Dispur area of Guwahati.

Das and her friends had extended plans for the day. First, they spent some time in the Zoo and then they will go to watch a movie.

“What’s happening in the state is not right and the government should think about the consequences CAA will have in Assam,” she added.

A large crowd was witnessed in Assam State Zoo-cum-Botanical Garden, Shraddhanjali Kanan, Assam State Museum, and the various temples of the city.

“Generally we go out for a picnic to nearby places on the first day of the year. Since anti-CAA protests are going on everywhere, so decided not to go far and visit the zoo instead,” said Ikramul Haque, a resident of Maligaon area of Guwahati.

Speaking to Northeast Now a zoo official said, “After many days there have been visitors in large numbers, but even then it is less than last year.”

“Usually, towards the end of December, the number of visitors to the zoo increases. But the scenario was completely opposite this year, mainly due to the anti-CAA protests,” he added.

“I admit, the last few weeks have not been a happy one for Assam or the Northeast,” said Minakshi Saikia, a resident of Chandmari who visited the zoo with her family.

“But the new year should begin with some optimism. We are hopeful that in 2020 we will have more positives,” she added.

“We should stand strong and be resolute and not let any third element enter among us and destroy the social and cultural fabric,” she added.