Union Cabinet: The notification will extend BEFR to Manipur to give its indigenous people protection from the provisions of CAA, 2019 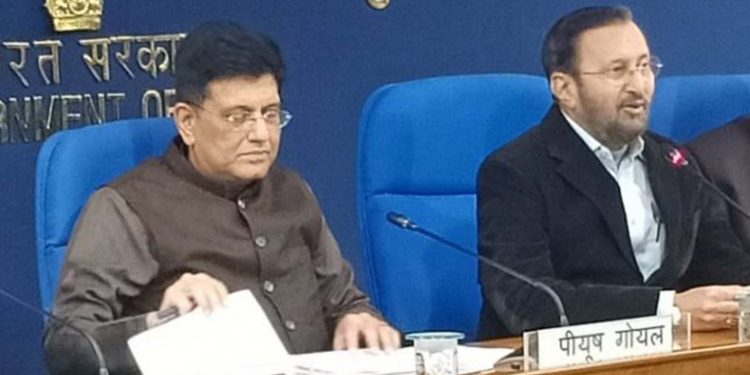 Union minister Piyush Goyal and Prakash Javadekar addressing the media over the decisions of the Union Cabinet.

The Union Cabinet, chaired by Prime Minister Narendra Modi, on Tuesday gave its ex-post facto approval to the Adaptation of Laws (Amendment) Order, 2019 issued by the President of India under clause (2) of Article 372 of the Constitution to amend the Bengal Eastern Frontier Regulations (BEFR), 1873.

“The notification will extend BEFR to the State of Manipur to give its indigenous people protection from the provisions of Citizenship Amendment Act, 2019 and make necessary changes in the said Regulation,” said a PIB press release.

The Inner Line Permit (ILP), which is an offshoot of the BEFR, has also been extended to Manipur as well.

Inner Line Permit is an official travel document that is issued by the concerned state government to allow travel of an Indian citizen into a protected area in a state for a limited period.

The ILP mandates the Indian citizens from outside the states which are under it to obtain a permit for entering into the protected state.

The document is an effort by the government to regulate movement to certain areas located near the international border of India.

The ILP was recently extended to Dimapur by the government of Nagaland while ILP is already in Nagaland, Arunachal Pradesh, and Mizoram.

The Meghalaya Assembly recently passed a resolution to be submitted to the central government seeking implementation of ILP in Meghalaya.

#Cabinet grants Ex-post facto approval to amend the Bengal Eastern Frontier Regulations,1873 to give indigenous people of
State of Manipur protection from the provisions of #CAA2019.