Due to incessant rainfall for the last few days, the guard wall of the Raj Bhawan at Kharghuli in Guwahati collapsed on Saturday.

Keeping in view of the safety and security of the patients, doctors, nurses and other paramedical staff of Borthakur Clinic & Hospital, situated below the Rai Bhawan, the Kamrup Metro district administration has ordered the proprietor of the hospital to vacate the hospital.

In an order issued on Saturday, Kamrup Metro deputy commissioner Biswajit Pegu said “it has been observed that the incessant rainfall for last few days in Guwahati has caused gradual land sliding of the back side part of Raj Bhawan at Kharghull, Guwahati”.

The DC warned that the guard wall of the Raj Bhawan is in “such a vulnerable position that it may fall at any time and may cause damage to the lives and properties of the patients, doctors, paramedical staff of Borthakur Clinic & Hospital which is situated just below Rai Bhawan”.

The DC said “in view of the safety and security of the lives and properties of the patients as well as doctors and other staff”, he directed the hospital’s proprietor to “vacate the hospital building immediately”.

“Moreover, the patients who are still under treatment in the hospital are to be shifted to nearby hospital with immediate effect,” the DC ordered.

On Friday, one person died and two others were seriously injured as the guard wall of a house collapsed at Kahilipara near Power House in the city due to landslide.

On the same day, due to landslide near a Buddha temple at Amingaon in North Guwahati, the vehicular traffic to Guwahati on the National Highway 31 was affected. 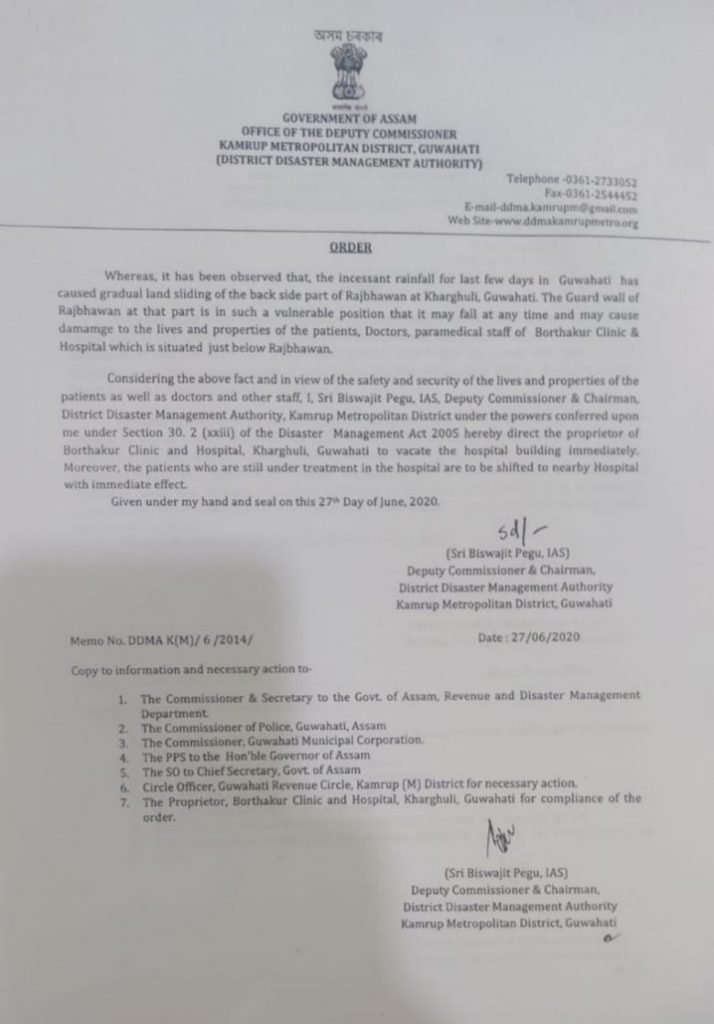