The CRPF Group Centre in 9th Mile under Kamrup Metro district along with its surrounding area has been declared as a Containment Zone on Saturday following the detection of 6 COVID19 positive cases in the centre.

An order issued by Kamrup Metropolitan deputy commissioner Biswajit Pegu on Saturday said the area has been declared a Containment Zone in the “interest of maintenance of public hygiene and to prevent further spread of COVID19 virus” in the area.

According to the order, the boundary of the Containment Zone covers the Kendriya Vidyalaya, CRPF CRPF Centre in the north; doctors’ residences in the south and Barrack No. 6,8 &7 in the south; Amerigog Hillside in the east and the staff quarters in the west.

The deputy commissioner has directed the circle officer of the Dispur Revenue Circle to seal the area immediately.

“Any unauthorized entry and exit into the notified Containment Zone is barred till the area is declared safe as per guidelines of Ministry of Health 8 Family Welfare, GOI,” said the order.

Any movement of any unauthorized individual and vehicle within the notified area is also prohibited with immediate effect, the deputy commissioner said.

“All statutory and other directions regarding maintenance of social distancing will be strictly enforced in the sealed area,” the deputy commissioner, who is also the chairman of the District Disaster Management Authority (DDMA), said.

The order, which has been issued under the regulations ‘The Assam COViD-19 Regulations, 2020’, will remain effective until further order.

Any violation of this order will attract action under the provisions of ‘The Assam COVID-19 Regulations, 2020’, ‘The Disaster Management Act-200S’, ‘The Epidemic Diseases Act, 1897’ and other relevant laws of the nation, the DC said.

Earlier, in another order, the Kamrup Metro deputy commissioner declared another area in the city as Containment Zone after a person from Dinesh Ojah Path in Tarun Nagar tested positive for COVID19.

The area which has been declared as Containment Zone includes Ashirbad Apartment in the north, Assam Flour Mill Campus, GS Road in the south, HP Apartment in the east and the residence of Chittaranjan Sarmah and Aphordite Beauty Parlour in the west.

The DC has directed the circle officer of Guwahati Revenue Circle to seal the area with immediate effect. 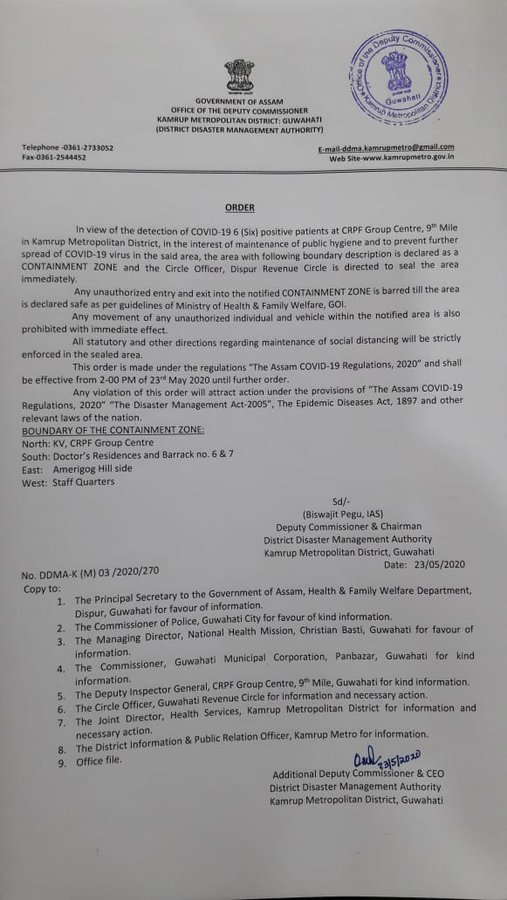