Dibrugarh Municipal Board (DMB) ward commissioner of No. 11 ward, Rachana Jain resigned from her post over issues related to Swacha Bharat Abhiyan.

Jain informed the deputy commissioner of Dibrugarh, Pallav Gopal Jha, about her resignation through an email on October 2, 2019.

Her resignation came at a time when Dibrugarh was placed in the 415th rank out of 425 cities surveyed across India during Swachh Survekshan 2019.

Talking to Northeast Now on Thursday, Rachana Jain said she was very much disappointed because the DMB failed in the Swachh Bharat Mission and also failed miserably to keep the town clean from garbage.

“On the 150th birth anniversary of Mahatma Gandhiji, I had no option but to resign from the post of ward commissioner. Being a public representative of my ward, I have the moral responsibility towards the citizens and residents of my ward,” said Jain.

Jain said she is “morally answerable to the citizens”.

Moreover, the DMB has failed in keeping Dibrugarh town clean because garbage was found littering in the town.

The public took to the post to vent their anger against the Dibrugarh Muncipal Board.

“Everybody is very well aware about the flagship pet project of Swachh Bharat Mission of our Prime Minister Narendra Modi and his vision of paying tribute to the Father of Nation Mahatma Gandhi through this great mission and initiative. When everybody is celebrating 150th Gandhi Jayanti across India but the condition of H.S. Road is in unhygienic condition with piles of un-cleared garbage,” said Jain.

“DMB has failed to clear the garbage on the occasion of Gandhi Jayanti. So, I am very much disappointed to remain as ward commissioner and decided to give my resignation,” the outgoing ward commissioner told Northeast Now.

“For the last one week, I have been continuously requesting the persons of the department concerned to clear the garbage daily, especially taking into consideration the ensuing puja celebrations, but did not get any positive response,” said Jain. 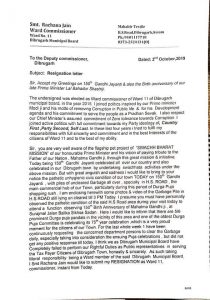 “As a ward commissioner in these years, I came across a lot of anomalies and corrupt practices prevalent in the day to day functioning of Dibrugarh Municipal Board. I have been repeatedly raising and complaining about the same in writing to the higher authorities concerned, in the past years without getting any positive response and without any corrective measures being undertaken, in spite of my  written complaints.”

She added, “In spite of my repeated complaints about the prevalent anomalies and corrupt practices continuing in DMB, no corrective measures have been taken by the higher authorities.”

She also said she repeatedly complained about important and financial decisions being taken by the chairperson Soma Chakraborty without consulting ward commissioners and “in complete violation of sections of Assam Municipal Act 1956”.