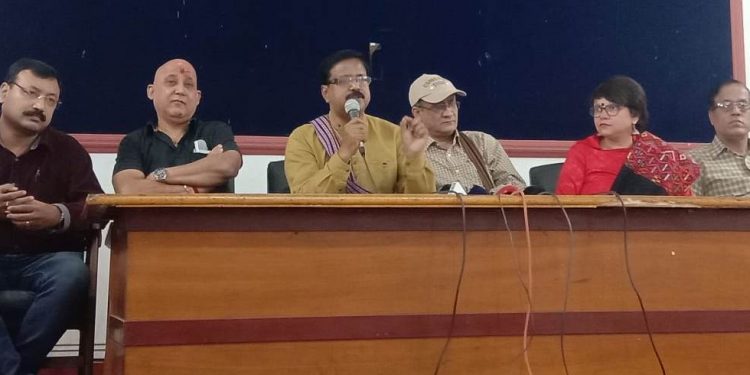 The Guwahati Press Club (GPC) Election Committee is ready to conduct the GPC elections on March 12.

Informing this during a joint press conference at GPC on Tuesday, Ajit Patowary, the presiding officer of the Guwahati Press Club elections, 2020, said, “There are 36 candidates, including eight women, in the fray for 10 posts, two of which are reserved for women.”

Talking to reporters, Patowary informed that in all, 816 voters will exercise their franchise in the forthcoming GPC polls.

“Elaborate arrangements have been made to hold the elections in a smooth way,” said Patowary.

The GPC election process started on February 27, 2020, when the presiding officer of the GPC elections handed over the voters’ list and nomination forms to the GPC returning officer.

Informing that the ballot boxes have been collected from the State Election Commission, Patowary said: “Printing of the ballot papers, identity cards of the candidates, their polling/counting agents, election officials, among others, have been completed.”

He also informed that for forthcoming GPC elections, the pandal for the voters and counting operation has been erected.

“The people involved in the election process have been intimated to make themselves available on the polling/counting date as per the schedule as announced on February 27, 2020,” he added.

The ballot boxes and the polling centre would be sealed on Wednesday in full view of the candidates/ their polling/counting agents.

He also appealed to all the candidates, their authorised polling and counting agents to be present at the GPC campus around 3 pm on Wednesday for the purpose.

The candidates have also asked to remove their publicity materials from inside the GPC compound and from within a 100-metre distance of the GPC compound ahead of 8 am on Wednesday when the campaigning for the GPC elections will come to an end.

Regarding the security arrangements, Patowary said: “The Guwahati City Police Commissionerate has assured us deployment of the adequate number of security personnel on the GPC compound from the afternoon of March 11, 2020, till the election process comes to an end on the night of March 12, 2020.”

For the voters and election officials, additional toilet facilities are also being arranged.

It may be mentioned that on February 20, 2020, the extraordinary general meeting of the GPC members asked the election committee to complete the election process within one month from the date of the meeting.

“The Election Committee is hopeful that all the GPC voters will exercise their franchise in this election, turning it into a great democratic festival in the annals of the GPC, after the dark period of long 17 years,” Patowary said.

He said during the last 17 years, the GPC voters’ “right to vote was trampled by some forces inimical to democracy, by keeping the GPC under their control, violating all democratic norms and the GPC constitution”.

It may be mentioned that in the last 17 years, the GPC was run under the control of former GPC general secretary Nava Thakuria.

He also moved the court in Guwahati challenging the election committee’s decision to curtail his voting right.

The court will hear the case on Wednesday.

“These forces have now moved the court to frustrate the democratic aspirations of the GPC members for establishing democracy in the GPC,” said Patowary.

“They have now moved the court with the plea to stall the ongoing GPC election process. But we have full faith in our judiciary and are hopeful that the court will reject all such pleas and uphold the democratic values,” he added.