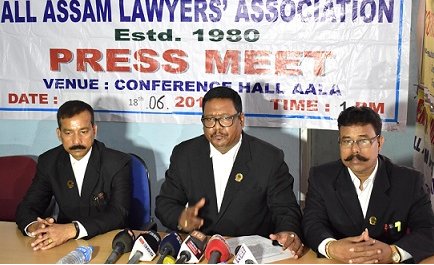 The All Assam Lawyers’ Association (AALA) on Monday alleged that a section of people have been trying to politicize the mob lynching incident at Panjuri Kachari Gaon under Dokmoka Police Station in Karbi Anglong district.

Talking to media persons, AALA general secretary Dipak Kr Das, “A section of people have been trying to politcise the Dokmoka incident, which should be stopped.”

The AALA leader, while appealing to all for maintaining peace and harmony, also made an appeal to name the waterfall at Kangthilangso near the incident of lynching after the victims – Nilotpal Das and Abhijeet Nath.

It may be mentioned that the two artistes from Guwahati were lynched at Panjuri Kachari Gaon on their return after visiting the waterfall at Kangthilangso.

At a time when many people have continued to attack a particular community in the social media for the incident, Das said, “The area is inhabited by people from various ethnic groups. No one should communalise the incident,” adding, “We cannot make a specific group guilty of something.”

The AALA also demanded that scientific method be applied in the probe into the incident.

Recalling the case of Jhankar Saikia, who died in 2013 at Diphu during a mob attack, the AALA general secretary said, “The family of Jhankar Saikia is yet to get justice. The case should also be probed in a fast-track court.”

He urged the State Government to appoint a public prosecutor in this regard.

Demanding exemplary punishment to the accused in the mob lynching incident, the AALA also threatened to move the Supreme Court if the Government does not fast track the probe.

Stating that Nilotpal and Abhijeet were victims of superstitious beliefs as the villagers were incited to attack allegedly by an accused terming them as ‘hopadhora’ (child-lifter), Das, while mentioning a comment by State Health Minister Himanta Biswa Sarma that cancer was “divine justice for sins”, claimed, “The Government itself is responsible for existence of superstitious beliefs in the society.”

Regarding the update process of the National Register of Citizens (NRC), final draft of which would be published by June 30, 2018, Das said, “Due to negligence or for not providing proper documents, names of some people may not come in the in the final draft NRC.” He urged the Government to make arrangements for tight security in the sensitive areas of the State so that untoward incidents cannot take place after the final draft publication.

Das announced that they would provide free legal help to the people who miss their names in the final draft NRC.

“We would like to warn those political parties and organisations who have been striving to protect Bangladeshis. Immigrants must be deported at any cost,” said Das.

He also said, “We condemn the Centre’s move to implement the Citizenship (Amendment) Bill, 2016.