Copies of the permission to transport the four elephants to Gujarat were not marked to the Ministry of Environment and Forest, and especially the Project Elephant Division

While the Project Elephant Division of the Ministry of Environment and Forest closely monitors trans-location of elephants, did the Assam Forest Department keep New Delhi in the dark about transportation of four elephants to Gujarat?

In her office orders nos. 396, 397, 401 and 402, Gupta under Section 40 (2) of the Wildlife (Protection) Act, 1972, accorded permission to the owners of the four elephants to transport their animals to Ahmedabad for a period of six months.

Also read: Traders in Bihar and UP sold 167 Assam elephants in Sonepur Fair

She directed the Conservator of Forest of Eastern Assam Circle to issue the Transit Pass as per Form XVI of the Assam Wildlife (Protection) Rules, 1997.

Copies of the permission were marked to the Additional Chief Secretary and other senior officials of the Assam Environment and Forest Department, Chief Wildlife Warden of Gujarat, owners of the elephants and the managing trustee of the Jagannath Temple. 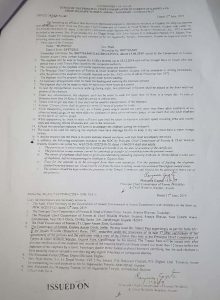 Surprisingly, copies of the permission to transport the four elephants to Gujarat were not marked to the Ministry of Environment and Forest, and especially the Project Elephant Division.

The Project Elephant Division of the Ministry of Environment and Forest, during the last few years, has been critical about trans-location of animals from Assam to other states, and especially to the temples.

In January 2014, S.K. Khanduri, Inspector General of Forests Wildlife Ministry of Environment and Forest, had directed Assam Forest Department to initiate immediate steps to stop transportation of elephants from Assam.

Khanduri had reacted on the basis of a complaint filed by Suparna Ganguly, president and trustee of CUPA and WRRC, Bangalore.

Ganguly, who was an Ex-Task Force Member of the Ministry of Environment and Forest for elephants, had drawn the attention of the ministry that an elephant was being trans-located from Assam to a temple in Kerala.

Also read: Smugglers on the prowl in Assam jungles in search of juvenile elephants

An elephant, which was being trans-located to a temple in Kerala, was intercepted in Barpeta. Ganguly had said that the trans-location attempt was a clear case of violation of the set rules.

The elephant was being taken from Chanddhora in Lakhimpur district to Sri Padmanava Swami Temple in Kerala in an open truck.

The elephant was being transported in an open truck and all its legs and neck were tied up. There was no provision for food and water on the truck.

Interestingly, the transit permit was issued in the name of one A. Kutti Pillai of Kerala. And, he had revealed that the elephant was to be donated to the temple on behalf of a union minister.

Also read: The dead man who sold his elephant in Assam

Earlier, C. Murti, Assistant Inspector General of Forest (PE) on November 7, 2013 had issued a memorandum (F.No.2-31/2013/PE) saying that it had come to their notice that no-objection certificate was issued for transporting elephants for religious purpose.

The memorandum said the Ministry is of the view that issuing of NOCs in the grab of religious purpose would be violation of Section 43 of the Wildlife (Protection) Act, 1972.

Murti categorically directed all the Chief Wildlife Wardens that provisions of Section 43 of WLPA should be followed in letter and spirit.

The officials of the Project Elephant Division of the Ministry of Environment and Forest have always been of the opinion that elephants of Assam, which are its heritage and pride, have the most heinous, cruel and abject life in various temples across India.

When the Project Elephant Division officials are so empathetic towards elephants from Assam, was it not the duty of the Assam Forest Department to keep them appraised about the move to trans-locate four juvenile elephants to Gujarat?

The Project Elephant Division maintains records of all captive elephants across India, and it should have been the duty of the Assam Forest Department to keep them updated about the move to transport four juvenile elephants to Gujarat.

The animal rights activists are critical about the Assam Forest Department’s decision to transport the four elephants to Gujarat, and even two cases were also filed in the Gauhati High Court.

Or, did the Assam Forest Department try to hide it because two of the four elephants were caught from the wild, and their names did not feature in the list of 905 captive elephants as on December 30, 2018?