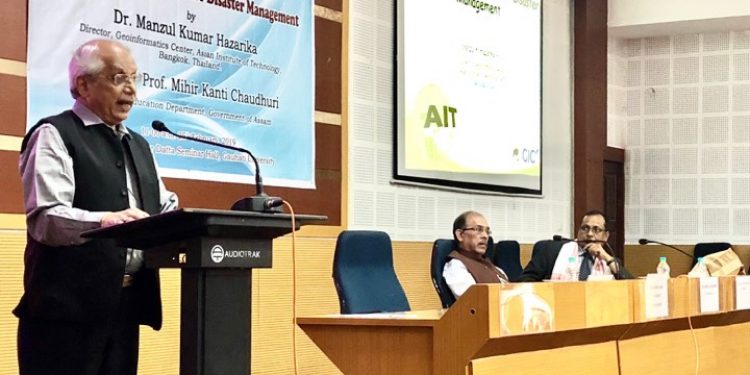 The Asian Institute of Technology (AIT) of Bangkok in Thailand is keen to provide internship for north-easterners on drone mechanisms in mapping for disaster preparedness.

“We are keen to collaborate with the government as well as the institute of north-eastern regions for accepting interns who could work on drone mechanism in mapping the disaster zones,” said Dr Manzul Kumar Hazarika, director of Geo Informatics Centre (GIC), Asian Institute of Technology in Bankok, Thailand.

He gave a very detailed slide show on risk management and disaster preparedness and explained how AIT had been working on innovative technology for countering disasters emanating from flood, tsunami, earthquake, etc

He also spoke on the roles of GIC in predicting earthquakes as well as the role of intelligence drones for mapping disaster zones.

He graphically explained high and low risk zone and stated how risk can be minimized with the aid of technology.

While inaugurating the lecture, Dr Mihir Kumar Chaudhuri, former vice chancellor of Tezpur University and the present adviser of Education department, Government of Assam said, “Higher education students should apply for such internship and Gauhati University in this context can play an active role.”

The programme was held at Phanidhar Datta Seminar Hall of the university premises.

Over the past 15 years, Hazarika has extensively worked in disaster management issues in more than twenty developing countries from Asia-Pacific as well as Caribbean regions.

Vice chancellor of Gauhati University, Dr Mridul Hazarika, who presided over the programme said, “Gauhati University, though is lucky enough for non-confrontation of any disaster in the last couple of years, it must always be alert and prepared for any kind of risk in future. In this context, lecture on such topic is beneficial for everyone.”